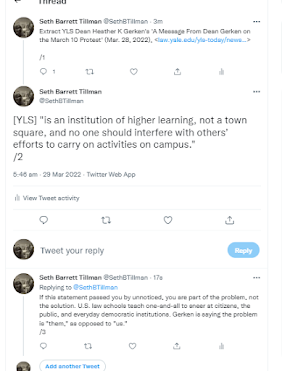 Posted by Seth Barrett Tillman at 12:54 AM No comments:

“I expect that once confronted with the economic consequences of Brexit, one year from now, U.K. voters will come to rue the day they voted by a tiny margin in favor of Brexit.”

Tillman adding: I wonder how many who read this passage saw (or now see) the ambiguity in Professor Calabresi’s wording?

Posted by Seth Barrett Tillman at 5:16 AM No comments: 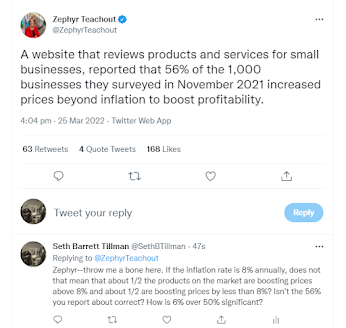 Posted by Seth Barrett Tillman at 12:20 PM No comments:

Bill the Pony and Windfola

“Tolkien made sure we knew that Bill the [P]ony was ok, but never once stopped to tell me that Windfola [Eowyn’s horse] was ok.” (@spectraling)

Bill the Pony came from Bree. He is one of us—one of ours—we take a personal or familial interest in Bill. On the other hand, Windfola was part of a foreign heroic warrior culture. We sympathize and hope for Windfola’s wellbeing. But Windfola is not one of ours (i.e., one of the readers’). Tolkien’s world only makes coherent sense if our local attachments are meaningful and remain so in spite of [our] meeting the greater wider world—even where that wider world is in some sense more ancient, more beautiful, and more noble than our own. At Mt Doom, Sam was reluctant do die NOT so that he might return to the ‘west’ of Middle Earth. Rather, he wanted to return to his home—the Shire, Hobbiton, and Bag End. That is why the loss of the Party Tree was a real, significant, personal loss ... in a way that a whole forest elsewhere would not be (to Sam Gamgee and to us).

Posted by Seth Barrett Tillman at 5:11 AM 8 comments: 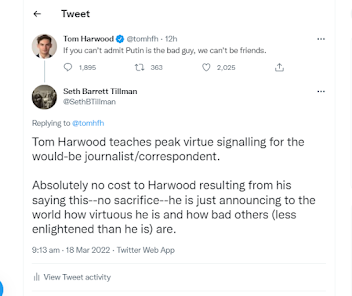 Posted by Seth Barrett Tillman at 5:20 AM No comments:

This is how my most recent article ends:

So why did [Jacob Henry] do it? We can only guess. Henry wanted to smooth things over; he wanted to fit in; he probably thought no one would notice. What followed were consequences he did not plan, and what he came to stand for in the popular mind may have been principles to which he did not subscribe. The service he did his country through the popular reimagination of November 20, 1809 was not of his own making.

By the 1820 census, Henry had migrated to Charleston, South Carolina, and established connections with its relatively large and affluent, by New World standards, Jewish community. One guesses that among them, Henry would find some comfort—among his coreligionists and the descendants of Marranos, and other crypto-Jews. He could enjoy basking in their and others’ pleasant admiration, and they would not ask too many uncomfortable questions.

As few have since.

Posted by Seth Barrett Tillman at 1:56 PM No comments:

Posted by Seth Barrett Tillman at 3:46 AM No comments: 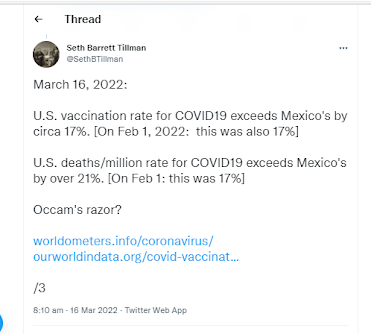 Posted by Seth Barrett Tillman at 4:17 AM No comments:

Posted by Seth Barrett Tillman at 6:23 AM No comments:

An Academic Coda on Kyle Rittenhouse

On October 22, 2021, Professor Jon D. Michaels & Dean David L. Noll posted Legal Vigilantes and the Institutionalization of Anti-Democratic Politics on the Social Science Research Network. See <https://ssrn.com/abstract=3915944>. On page 23, the two law professors wrote: “Kyle Rittenhouse, the heavily-armed murderer of two BLM protestors, has been hailed as a heroic vigilante . . . .” (emphasis added) In support of the position they took at that time, they cited an article by Paige Williams in The New Yorker. See Seth Barrett Tillman, ‘Rittenhouse, Murder, and the Use of “See” as Direct Support in Legal Writing,’ New Reform Club (Nov. 21, 2021, 7:47 AM), <https://reformclub.blogspot.com/2021/11/rittenhouse-murder-and-use-of-see-as.html> (reproducing extracts from Michaels and Noll’s original 2021 publication).

On February 14, 2022, Michaels and Noll posted a new draft, appearing at the same Social Science Research Network link: <https://ssrn.com/abstract=3915944>. The revised paper is now titled: Vigilante Federalism. [The Michaels and Noll’s paper is now marked as forthcoming in Cornell Law Review.] At page 35, they now write: “Kyle Rittenhouse, who shot and killed two BLM protestors, has been hailed as a heroic vigilante . . . .” (emphasis added) And again, they support their position with a citation to Williams’ article in The New Yorker.

One would think a shift from “murderer” to “shot and killed” might call for some explanation. “Murderer” is a term of opprobrium—it carries with it the judgment that the person acted illegally, or acted without moral justification, or both. “Shot and killed” is less judgmental. This latter characterization leaves open the possibility that: the defendant was not a wrongdoer, or the defendant acted with a recognized legal defense, or both. In other words, the difference between murderer and shot and killed is no small thing, and an exploration of the authors’ shift in position might be part of a thoughtful publication.

First, it is possible that the authors have not shifted their position at all. Rather, they have just changed their tack or tactics, if only to avoid their being defendants in a defamation action brought by Rittenhouse. In other words, their opinion of Rittenhouse has not changed. If so, their lack of transparency and directness with the reader, would seem to undermine some of the worthiness for publication.

Second, the authors now understand, in light of the jury’s verdict, that their original position lacks clear support. Their new position is accurate, but it refrains from making any direct judgment about the rightness of Rittenhouse’s conduct. Perhaps, the authors believe that Rittenhouse may be a legal wrongdoer, and he will or would be judged a wrongdoer under the more lenient civil standard. In other words, the authors are acknowledging that they do not know if Rittenhouse acted illegally or morally wrongfully. And they are leaving it to the reader to figure out if Rittenhouse’s conduct was illegal or otherwise wrongful. But if they cannot reach a judgment on the matter, and if they are unwilling to affirm their own lack of clarity, then why write on the topic? And, why do so a second time? Would it not make more sense to acknowledge that the situation is less than fully clear?

What the authors could have done—is to acknowledge that legal academics (and academics generally) suffer from all the limitations the rest of humanity suffers from.

They join in group think.

Sometimes they do not even notice that they are retracting.

And they cover their tracks.

It is not a very pretty picture.

Posted by Seth Barrett Tillman at 4:32 AM 4 comments:

The Left and Public Transportation 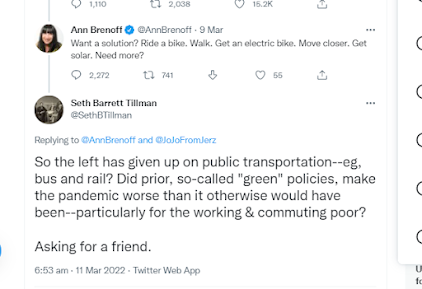 The Downside of Nuclear Power 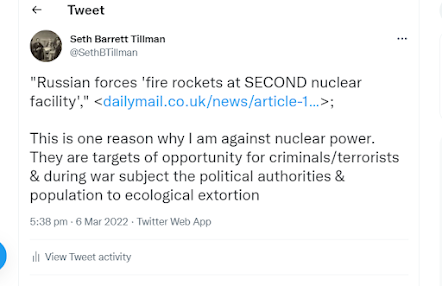 We Will Always Have England

Posted by Seth Barrett Tillman at 6:05 AM No comments:

The New York Times and Trump: The Same As It Ever Was

Here is the link to the new (March 5, 2022) article in The New York Times explaining why Alvin Bragg, the elected Manhattan District Attorney, is not seeking an indictment against Donald Trump for allegedly having inflated the value of his properties when he sought bank financing. See Ben Protess, William K. Rashbaum, and Jonah E. Bromwich, ‘How the Manhattan D.A.’s Investigation Into Donald Trump Unraveled,’ The New York Times (Mar. 5, 2022), <https://tinyurl.com/2p8tshfw>. The March 5 article tells the same tale that it had reported in its February 23, 2022 article. Not just the same tale, but the same tale by the same three reporters. See William K. Rashbaum, Ben Protess, Jonah E. Bromwich, Kate Christobek, and Nate Schweber, ‘2 Prosecutors Leading N.Y. Trump Inquiry Resign, Clouding Case’s Future,’ The New York Times (Feb. 23, 2022), <https://tinyurl.com/2y7h36ep>.

The basic thread of both New York Times stories is that two dedicated, experienced frontline prosecutors—Dunne and Pomerantz—albeit both holding temporary appointments in the Manhattan district attorney’s office—were ready to seek an extension from the judge having supervisory authority over the soon-to-expire Trump-related grand jury. They wanted to extend the life of the grand jury in order to continue the Manhattan district attorney’s investigation. According to the three New York Times reporters, the newly elected Bragg stopped the two prosecutors from seeking an extension; instead, Bragg will allow the grand jury to expire absent any indictment against Trump.

The problem with the New York Times’ story is that the known facts are equally consistent with the opposite story. The alternative view is that the frontline prosecutors realized that they had no case, and they were unwilling to seek an extension from the judge having supervisory authority over the grand jury. Bragg may have ordered them to seek an extension or be fired. Having no good faith basis to seek a judicial extension of the grand jury proceedings, the prosecutors chose to resign.

Rashbaum, Protess, and Bromwich and The New York Times would have us believe that it is Bragg, along with some of the permanent staff prosecutors in Bragg’s office, that are holding up the investigation and a Trump indictment. But these three reporters do not explain how they arrived at that conclusion. The three New York Times reporters don’t explain who their source is or who their sources are, or how many sources they have, and who they work for. Or what interest they may have for anonymously communicating their information to the media. Because the reader does not know who the sources are, the reader cannot evaluate the sources’ potential biases. Was Bragg a source? Someone on Bragg’s staff? Were Pomerantz or Dunne sources? Or one of their underlings or associates in the Manhattan District Attorney’s office? A grand juror? Or someone in a supervisory role over the grand jury? The judge?—or, someone on the judge’s staff? We don’t know, and three New York Times reporters won’t tell us. There is not even a vague statement by the three New York Times reporters along the lines that the reporters’ findings were “confirmed by multiple highly placed sources in the District Attorney’s office.” Indeed, the three reporters’ March 2022 article has no discussion of sources at all. It is as if the whole story fell into the three reporters’ collective lap as manna from heaven.

For example, the article by the three New York Times reporters discusses e-mails sent by or to their narrative’s central players. But their article does not explain if the three reporters actually viewed these e-mails or if they were merely characterized by unnamed sources.

A prosecutor’s revealing confidential grand jury testimony material is, at least, civil contempt of court, if not criminal contempt of court. [See <https://sgp.fas.org/crs/secrecy/R45456.pdf>.] One might think that Bragg’s, Pomerantz’s, Dunne’s, their underlings’ or colleagues’, or some judge’s or judicial staff person’s disclosing confidential prosecutorial deliberations and the nature of what information was put before a grand jury was itself the story—or, at least, a story (among others) worth exploring. But, no, that would require some introspection. And we cannot have that at The New York Times. 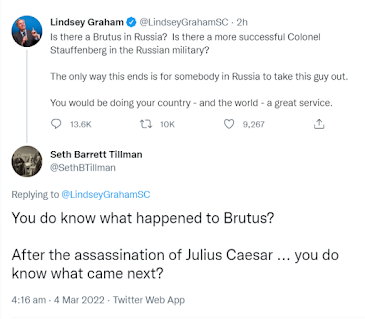 Posted by Seth Barrett Tillman at 12:10 AM No comments:

Posted by Seth Barrett Tillman at 1:19 AM No comments: