We now all know that the Republic of Ireland’s women’s team players were filmed chanting (what is widely understood as) an IRA song. Before, during, and even after the Football Association of Ireland issued its apology on behalf of those players, the great and the good were heard saying the problem was “education.” In other words, these young adults were too young to remember what the IRA had done, and to whom, and Irish schools and wider society had failed to teach them. The great and the good were correct—but not in the way they meant.

Every year the European Parliament determines the winner of the Sakharov Prize for Freedom of Thought. Who was Andrei Sakharov? Andrei Sakharov devoted the major part of his professional life towards developing advanced atomic weapons for the former Soviet Union. He did this work under Stalin and under his successors. Sakharov’s work made it more difficult for the United States and the world’s other democracies to press for human rights reforms in the Soviet Union and the countries within its orbit—just as his work made it easier for the Soviet Union to threaten its neighbours and the other countries of the world. The nuclear weapons in Russia today which threaten Ukraine and all of Europe—who do you think made those weapons? When Andrei Sakharov has a European Union prize named after him—then lessons will be learned.

Nearer to home, Ireland issued a Che Guevara stamp on the 50th anniversary of that terrorist’s death. Similarly, President Higgins eulogized Fidel Castro—a dictator so brutal that hundreds of thousands sought escape in rickety boats on the Atlantic. When Guevara and Castro are honoured and eulogized—then lessons will be learned.

The problem is not that the system failed to teach these young people; the problem is what they were taught—in school and out of it. The problem is not that they failed to learn what was taught, but that they learned it all too well. If a society’s senior elected officials and other elites teach that Sakharov, Guevara, and Castro deserve admiration, and those elites teach this lesson repeatedly, in public, and in planned events, then why object when young athletes, in a one-off, private, and impromptu event, do much the same? The athletes were just doing what they were taught to do—at every step of the way.

Posted by Seth Barrett Tillman at 9:25 AM 4 comments: 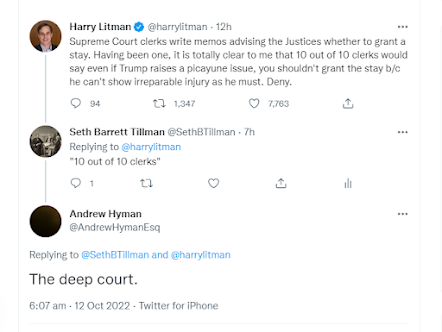 Posted by Seth Barrett Tillman at 8:55 AM No comments:

A Simple Plan for Ending the War in Ukraine

Russians opposed to Putin have no place to go. Opposing Putin during a hot war makes members of the Russian opposition adverse to their troops in the field and, therefore, it exposes them to charges of disloyalty, if not worse.

Likewise, Putin has no place to go. If he loses the war and fails to take and hold Ukrainian territory, he will lose power. And those who take power out of his hands might not intend or want a peaceful transfer of power. In these circumstances, Putin has little to lose and everything to gain by extending the war, risking escalation, and, indeed, using tactical nuclear weapons. Such an escalation might cause his own death, as it may cause millions of other deaths. But Putin may not be like you and me. He may draw comfort from pulling down everyone else’s home if his own political future is in the process of being destroyed.

What is to be done?

Give Putin, his Russian opposition, and Ukraine a desirable place to go. What place is that? It is a place everyone in Russia and Ukraine, from oligarch to worker on the factory floor, wishes to gain access. That place is: the European Union. Indeed, overtures by the EU and NATO suggesting membership for Ukraine (and only Ukraine) were some of the ill-advised decisions that led us to today’s terrible status quo. Those overtures might have been the wrong thing for the West to have done, but might not modifying those decisions be today’s path to peace? Let the European Union offer Russia AND Ukraine a deal—that is, total withdrawal of all troops to borders as they stood prior to Russia’s February 2022 invasion, and if done within 30 days, then both Russia and Ukraine would be granted immediate EU membership.

If the offer is accepted and then put into effect, then the hot war is over. That is a good result. Putin will find it easier to end the war if he has something in-hand that his people will value. And I suggest the average Russian, as well as every Russian oligarch, would value EU citizenship, travel rights, and the right to work across the EU; indeed, they would value those intangible legal rights much more than they would value Russian troops’ holding Ukrainian territory and its sunflower oil supply.

If the offer is rejected, then Putin and his political allies will hold even less popular support because the Russian voter will know that Putin’s incompetence (in war) and his intransigence (in making peace) cost them EU citizenship with all that it entails. Making Putin less popular, in this fashion, is also a good result.

For Ukraine, there is no downside. If the plan succeeds: the war ends, and Ukraine gets EU membership. Ukraine would be mad to reject the offer, and they could continue to make overtures in international fora for the return of Crimea and their eastern territories. If Putin rejects the offer, but Ukraine accepts it, then Ukraine will lose nothing consequential, and it will enjoy much additional good will from the international community.

The downside (such as it is) of the EU’s making this offer is that it will be accepted, and then the EU Parliament (and other EU institutions) will have to accommodate Russian and Ukrainian nationalists. That will be tricky, especially as it will undoubtedly come with money laundering, fraud, and subversive intelligence activities. But we, in the West, are not without defences against such wrongdoing. And such wrongdoing, which is surely regrettable, is much more manageable, then a hot war risking escalation, along with the outflow of millions more migrants’ escaping conflict and military conscription.

It may be the EU and its member states have the means to end this war. Let us encourage them all to risk making peace.

Posted by Seth Barrett Tillman at 10:03 AM No comments:

A Letter to The Irish Times on Nuclear Power for Ireland

Letters to the Editor

I do not doubt that today’s small modular nuclear reactors are safer than their historical large-scale predecessors. But “safer” here means with regard to accident and acts of God. The unspoken risks posed by nuclear power do not relate to accident; rather, the substantial risks posed by nuclear power relate to intentional wrongdoing in connection with crime, blackmail, terrorism, and war. Adopting nuclear power is just a way of saying you wish to lose the next war—just look at the threat posed to Europe by Russian occupation of Chernobyl and other Ukrainian nuclear facilities.

Today, Ireland is at peace: Ireland has no enemies which presently or in the near future threaten an invasion of its landmass. If you believe that this will last forever and that history is at an end, then just maybe nuclear power is a reasonable option. But if history is not over, then nuclear power puts both safety and hard-won national independence at risk.

Posted by Seth Barrett Tillman at 6:44 AM No comments: