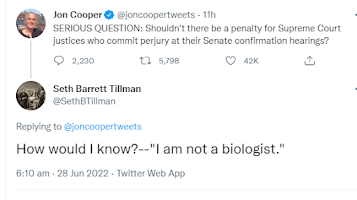 Posted by Seth Barrett Tillman at 1:16 AM No comments:

Posted by Seth Barrett Tillman at 7:40 AM No comments: 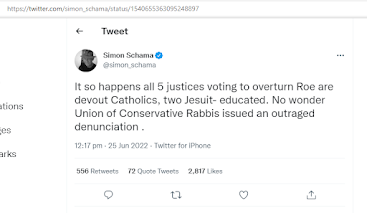 1. Professor Simon Schama: “It so happens all 5 justices voting to overturn Roe are devout Catholics.” (bold added) Gorsuch was raised Catholic, but it is not clear that he currently identifies as Catholic. Gallup recently identified Gorsuch as a Protestant. See Frank Newport, ‘The Religion of the Supreme Court Justices,’ Gallup (Apr. 8, 2022), <https://tinyurl.com/2p9fj9re> (“[Judge] Jackson, who was confirmed by the Senate on Thursday, will be only the second Protestant on the high court when she joins the [Supreme] [C]ourt this summer, along with Neil Gorsuch (who is Episcopalian but was raised Catholic).”).

2. Schama: “It so happens all 5 justices voting to overturn Roe are devout Catholics.” (bold added) What is the evidence that each of the 5 are “devout” Catholics? What did Schama mean by this claim? It cannot be that they attend a Catholic church—because Gorsuch (reportedly) attends an Episcopal church. See Alison Durkee, ‘What religion is Neil Gorsuch,’ Mic (Apr. 7, 2017), <https://nc.mic.com/articles/173527/what-religion-is-neil-gorsuch> (Gorsuch “has been attending Episcopal services for the past 15 or so years.”). Even if Schama had a particularly meaning in mind for “devout,” he cannot possibly believe that his readers had a common, settled, or unified understanding of what he intended by that word. So why would a respected historian use such a loaded and ambiguous term?

3. Schama: “No wonder [the] Union of Conservative Rabbis issued an outraged denunciation.” (bold added) There is no organization with the name: “Union of Conservative Rabbis.” There is an organization called the Rabbinical Assembly, which can be characterized in many ways, including, as a union of Conservative rabbis. If Schama thinks the Rabbinical Assembly’s view is important, then why not use its actual name? Is it really that he has no genuine idea—at all—what Jewish organization he is referring to, and he is merely co-opting the Jews most conveniently at hand in order to show that some Jews take exception to what some Catholics (and others) have done?

4. Schama: “It so happens all 5 justices voting to overturn Roe are devout Catholics, two Jesuit-educated. No wonder [the] Union of Conservative Rabbis issued an outraged denunciation.” (bold added) Schama does not link to the Rabbinical Assembly’s response to Dobbs. So we cannot evaluate whether it was a mere disagreement, or a strongly worded but otherwise fair-minded “denunciation,” or an “outraged denunciation.”

That said, even without reading the Rabbinical Assembly’s response, and contra Schama, it would be a “wonder” if the Rabbinical Assembly’s objection were related to the fact that the 5 Justices in the Dobbs majority held a particular religious persuasion, Catholic or otherwise, or that some or all of the 5 Justices were educated in institutions connected to other religions, or that some or all of them were “devout,” whatever that might mean. If that were the basis for the Rabbinical Assembly’s objection, it would not be a “wonder.” Rather, it would be an American tragedy, and an invitation to ramp up sectarianism and religious communalism of the sort that the United States has avoided throughout the largest part of its history.

—Whom the gods would destroy they first make mad.

Most Orwellian tweet of the day!—by a self-described “Reporter”

Posted by Seth Barrett Tillman at 6:44 AM No comments:

If a state passes legislation limiting now extant gun-ownership rights, and that state includes one or more native American Indian reservations where a majority of the registered members remain attached to their traditional gun-ownership rights and they refuse to comply with the new laws ….

Do you advocate sending in the U.S. Marshal to make arrests and to seize their guns?

If the U.S. Marshal and his deputies (and posse) are insufficient to overcome resistance by our nation’s indigenous inhabitants, do you advocate sending in the U.S. National Guard or the regular U.S. military? And if your answer is “no,” then what happens to equality under the law?

By the way, would you like to volunteer for that mission?