Why Does Google Do This?

This leaves me wondering if there are other citations out there that I have not discovered because I don’t know what string to use as a second string. Is there some way to tell Google to find all “Seth Barrett Tillman” items without regard to a well-chosen second string and thereby uncover all “hidden” citations?

For example, if you search on
“seth barrett tillman” AND “McCutcheon v. Federal”
you will see that the last returned item is:
アメリカ連邦選挙資金法制における 寄付総額規制の憲法学的考察

But if you just search on “seth barrett tillman”,
you don’t get that item. It is a bona fide citation in a Japanese law journal. Why does Google do this?

Posted by Seth Barrett Tillman at 7:23 AM 47 comments:

If Trump Were Playing Hardball 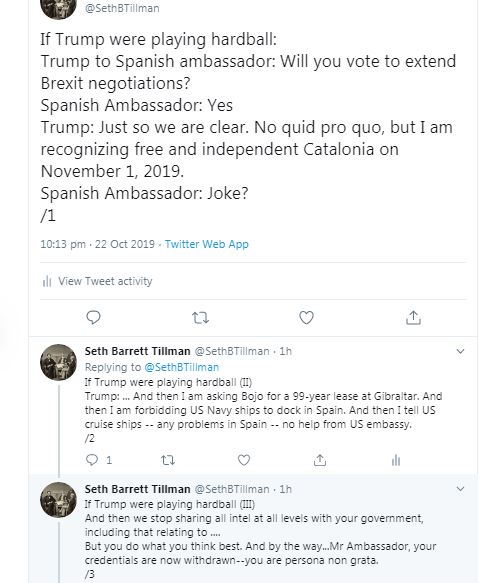 Your October 6, 2019 article took the position that “federal [government] lawyers have defended” Trump in the three Emoluments Clauses cases. That’s not quite right.

In the third lawsuit, plaintiffs initially sued the President exclusively in his official capacity, but later they amended their complaint to also sue the President in his individual capacity. Subsequently, plaintiffs sought to unilaterally and voluntarily dismiss their individual-capacity claim against the President. The President’s personal attorney objected to any such dismissal: he wanted his day in court.

Plaintiffs would much rather litigate against the DOJ—an organization which is wholly unconcerned with the President’s personal and political reputation—a reputation which takes a pounding each and every time the DOJ loses a motion, trial, or appeal even though President is not really the defendant and has no personal day-to-day control over the DOJ and the government-defendant’s legal strategy (as he would have if he were the actual defendant).


Tillman, a U.S. national, has filed multiple amicus briefs in the course of the three Emoluments Clauses cases.