Rittenhouse, Murder, and the Use of “See” as Direct Support in Legal Writing 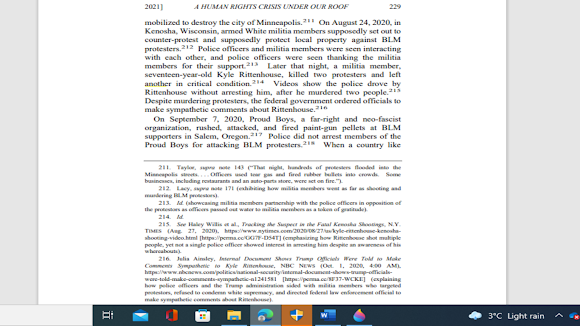 You can find the entire article here: Aglae Eufracio, A Human Rights Crisis Under Our Roof, 23 St. Mary’s L. Rev. on Race and Social Justice 201, 229 (2021), <https://tinyurl.com/2yzaecrw>. Eufracio’s citation to Haley Willis’s New York Times article, at footnote 215, is preceded by a “See”. That means the cited material lends (or, is supposed to lend) direct support for the material in the main text—that is, Rittenhouse “murdered two people.” Have a look yourself: you decide if Haley Willis’s article (or any of the other source material in nearby footnotes) lends direct support for the proposition that Rittenhouse “murdered two people.”

It is possible that the author, attorney Aglae Eufracio, believes that the prosecutors’ charges were strong presumptive evidence of Rittenhouse’s guilt. Eufracio is an “immigration and human rights attorney.” Id. at 201 n.*. Does one imagine that when Eufracio walks into court representing aliens who the federal government seeks to deport, Eufracio tells the judge: Your honor, the government’s charges are strong presumptive evidence of my client’s guilt and deportability. Is this Eufracio’s customary position?

Alternatively, perhaps, Eufracio’s use of “murdered” (and “murdering”) was colloquial language—i.e., a murderer is someone who kills another. Is that what Eufracio meant? Still, I think law reviews usually reserve the term ‘murder,’ and its close textual variants, for unlawful killings, in conjunction with some measure of meaningful deliberation.

You can find the entire article here: Jon D. Michaels & David L. Noll, Legal Vigilantes and the Institutionalization of Anti-Democratic Politics 23 (posted Oct. 22, 2021), <https://ssrn.com/abstract=3915944>. Here the authors characterize Rittenhouse as a “murderer.” Michaels and Noll’s support is a New Yorker article by Paige Williams. That citation is preceded by a “See”. That means the cited material lends (or, is supposed to lend) direct support for the material in the main text—that is, Rittenhouse was a “murderer.” Again, have a look yourself: you decide if the Paige Williams article (or any of the other source material in nearby footnotes) lends direct support for the proposition that Rittenhouse is a “murderer”.

Is this where we are now in regard to the use of “See”?

Posted by Seth Barrett Tillman at 7:47 AM

Kind of silly. In both instances the "murderer" characterization is within the factual recitation being described - in the first case that police drove by Rittenhouse when he tried to surrender (true and supported by the citation) and in the second, that some have hailed Rittenhouse as a "heroic vigilante", etc. (same). So, I rate this as perhaps sloppy, but hardly scandalous.

Someone was called a murderer. You write anonymously. End of story.

Many people, having been acquitted of murder, have also been called murderers in the mass media nonetheless; O.J. Simpson comes to mind. The late Michael Jackson was accused multiple times in the mass media of child sexual abuse, but no convictions. I don't recall any successful defamation judgments for either man.