The Intellectual Origins of Jeffersonian Democracy 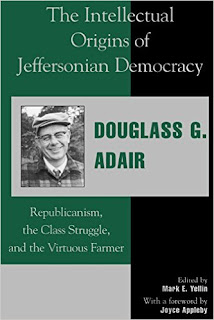 Oftentimes influential books are relatively short. Thomas Paine's Common Sense, for example, was originally published as a pamphlet. The Communist Manifesto, one of the most perniciously influential books of the last 200 years, is short as well. So, when it comes to influence, the massive treatise isn't always the one that people turn to. In an academic culture that often values heft over insight, one book that demonstrates that less can be more is the late Douglass Adair's 185 page landmark study, The Roots of Jeffersonian Democracy. Written in 1943, the work was Adair's doctoral dissertation at Yale. It is now back in print, republished in 2000 by Lexington Books.

As the introduction to the Lexington Books edition puts it, the checkout list for Adair's dissertation reads like "a who's who of early American history." The number of scholars across ideological and methodological camps who have been influenced by Adair is astounding. And there is good reason that Adair's dissertation is so influential: it is that rarity among books that start as dissertations -- a clear, concisely worded, focused study of its topic. And Adair's topic is ambitious, no less than understanding the roots of the political theories of the formative period of the American Republic.

While the title of Adair's dissertation centers on Jeffersonianism, most of the study is devoted not to Jefferson but to those around him. Madison figures prominently, but so does Hamilton. Adair's presentation of Hamilton is generous, and Adair goes out of his way to discuss Hamilton's contributions to the emerging constitutionalism of the early American nation. And not just Hamilton's influence on the constitutional convention and the ratifying debates afterward, but Hamilton's deeper political convictions regarding the need for a "balanced government," one that was limited not only in scope but also in its ability to concentrate power in the hands of any one group, interest or person.
Part of this idea of balance included the notion of an aristocracy of ability and position that would be able to temper the passions of the mass of the people. It was this emphasis on balanced government that, in Adair's view, motivated the Federalist Party, and bound together such different personalities as Hamilton and John Adams in common political endeavor.

Adair's study also details the powerful influence that classical Greco-Roman political theory had on the discussions regarding American government during the founding period. Aristotle and his disciples as well as Plato's student Xenophon figured prominently not only in Federalist political theory, but in the rising political ideology of the Jeffersonian Republicans. Adair notes that Hamilton's concerns for balanced government were bolstered by appeals to classical theorists. In Adair's telling, Hamiliton was widely although not deeply read in the classics, and he was so enamored of classical political theory that he "could not turn his reading of ancient history at all toward the clarification and ordering of the American world in which he lived." Indeed, Adair's study of this component of Hamilton's intellectual formation serves as a cautionary tale about the risks of imbibing too much of the classics at the expense of understanding one's present surroundings. As Adair puts it, "his [Hamilton's] classical learning operated to distort and becloud so many political phenomena lying under his very eyes that he could never deal with them realistically, except in minor matters of technique."

The real star of Adair's book is James Madison, the one-time disciple of Washington and ally of Hamilton who eventually became the scholar- and politician-apprentice to Thomas Jefferson. Madison, in Adair's view, had a far more nuanced and realistic understanding of both of classical patrimony and the political reality of the early American Republic. Madison's understanding of the necessary constitutional order included limitations on both federal and state power, a recognition of the rights of the majority along with a commitment to the protection of the rights of the minority. According to Adair, Madison's defense of the Virginia Plan in the constitutional convention flowed out of these concerns, and reflected a prudential approach to ensuring both minority rights and majority governance. In line with Republican political ideas, Madison did not see history, as Adair puts it, "just the struggle of the rich and the poor trying to devour each other. The problem of faction did not pivot entirely upon the conflict of haves and have-nots." With this insight, Madison escaped the trap of classical political theory, eluding the chains of the Greek and Roman philosophers who saw such struggle at the heart of every system of government. And for this escape Madison was indebted in no small part to writers of the Scottish Enlightenment, notably David Hume, as Adair details.

This isn't to say that Madison and the Jeffersonian Republicans were able to maintain a completely clear-headed view of early American politics. If Hamilton and the Federalists got lost in classical political theory, Madison and the other Jeffersonians fell into the myth of the "virtuous farmer." The "ideal commonwealth," as Adair summarizes Madison's views, "would operate among a nation of husbandmen[.]" And it is in this regard that Adair's study loses much of its energy. Adair fails to see that just as the Federalists were too committed to classical political theory, the Jeffersonians were too committed to an agrarian polity that was rapidly losing ground to the rising industrial economy of the West. Adair didn't see that it was precisely in this way that the Jeffersonians made a critical misstep, completely overlooking the economic trends that were then a-building. One of the things that is so fascinating about early American Republic is that both the Federalists and the Republicans had such critical and (in hindsight) obvious conceptual errors.

If the Federalists were lost in Greek philosophy, they were at least clear-headed when it came to understanding the way the winds were blowing when it came to economics. If the Jeffersonian Republicans were able to see their immediate political world with clear vision, their agrarian dogmatism left them vulnerable to being blindsided by the emerging world of banks, trade and industrial production. This weakness on the part of the Jeffersonians explains, at least in part, the inability of the Jeffersonian Republicans to dismantle much of the Federalist architecture of government and the economy after the revolutionary election of 1800. Adair did not address this aspect of the respective weaknesses and strengths of the Federalists and Jeffersonians, nor did Adair extend his study to deal with Jefferson's tenure as president. No study, of course, is perfect, but the lack of such discussion is a noted lack in a book that otherwise excels in a deep reading of the intellectual trends of the early republic.

Such a discussion would have provided a better glimpse at something that Adair did note well, namely the pessimism that Jefferson and Madison had at the prospects for the American nation. Indeed, the Jeffersonian inability to understand the new economic realities that were then on the rise led both Madison and Jefferson to hold a pronouncedly negative view of the long-term viability of the new republic. Eventually they thought, as Adair points out, that the republic would become too crowded and too corrupt for constitutional government to remain; "commerce and manufactures" would eventually overwhelm the nation. The best that Madison hoped for was "at least a generation" of constitutional government among the American people.

Its flaws aside, though, it is difficult to heap too much praise on this book. Adair's study is a insightful look into what he describes as "the alien intellectual territory" of Jefferson and Madison. It is notable for its depth, for its insight, and for its examination of the sources for much of the political thought of the early republic. It is a book well worth reading.
Posted by Mark D. at 7:51 AM