Human life is not too controversial

[Reprinted, with the exception of the opening quoted exchange and video along with some minor revisions, from my 2013 post at another site about censoring imagery critical of abortion. The images in that post were later removed. -tk]

This brief exchange, ending with a Democratic senator refusing to engage further, is about as far as typical public discourse extends on this important public issue:


That is because the rhetorical case for protecting the unborn has succeeded. The debate is over.  It would be, that is, had the Supreme Court not issued – in Justice Ruth Bader Ginsburg’s own words – a “difficult to justify,” “heavy-handed judicial intervention” in Roe v. Wade 40 years ago.  Today, nearly two-thirds of Americans support making abortion generally illegal after the first three months of pregnancy.  A staggering four-fifths support bans in the last three months.  So if the pro-choice movement is just a paper tiger subsisting on the likes of distasteful “war on women” memes, how is it still so powerful? 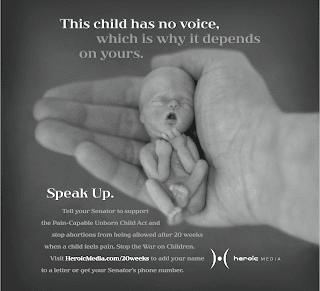 Never underestimate the media as an ally.  True, people cannot justify the unjustifiable killing of a distinct, self-directing human life. But in this multimedia age, intellectual arguments simply do not carry the day.  Only pictures can tell a story and inspire people to action.  Without pictures, abstruse sophistry about zygotes and blastocysts lull readers into false complacency, while veiled accusations of waging “wars” on science and women cow them into silence.

Pictures change all that.  No one knows that better than the media.

LifeNews reported that The Chicago Tribune, USA Today, and the LA Times refused to run an advertisement showing a hand holding a 20- to 24-week-old baby, pictured above, created by Heroic Media.  The pro-life organization said they were told the ad was “too controversial.”

Objectively speaking, there is nothing controversial about the picture in the ad.  It is a human fetus pictured during a stage of development an overwhelming majority of Americans believe ought to be protected by law.  The text of the ad asks for support to “stop abortions from being allowed after 20 weeks when a child feels pain” – again, something a vast majority already support.

The only potentially objectionable content is, perhaps, the call to “Stop the War on Children.”  As a reason for not running the ad, however, this does not wash.  First, the Chicago Tribune, after refusing the initial ad, did accept an alternative ad, pictured below. The alternative ad features the very same copy as the original, including the “War on Children” reference.  The only difference is the imagery: 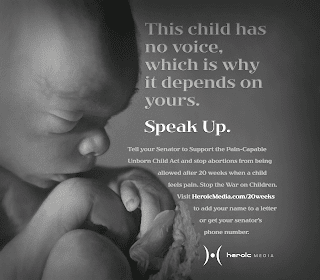 Moreover, the Tribune does not seem to have a problem with “war on” references.  The first four links that came up on a Google search for the phrase “war on women” at the Tribune were these:
There were more Google results, as well as other examples of “war on” and “anti-women” references on the Tribune’s own site under “Related Articles” for the above linked pieces.  But there is no need to belabor the point.  If “war on” and “assault on” rhetoric is “controversial,” it is only disqualifyingly so when it comes to disfavored causes.

But as I said, in the battle for minds, rhetoric has only won the abortion-rights camp between a fifth and a mere third of America.  In the battle for hearts, I’d wager their ranks are thinner still.  They are right to fear photos like these.  Their proliferation would lay waste to what remains of their cause.
Posted by Tim Kowal at 2:08 PM

Like showing pictures of the horror of abortion, "babykilling" is now anathema in civil society, of course, although the left's full roster of invective remains in routine use.

But "babykilling" is accurate. I have begun to revive it. Pallid politeness in the face of naked evil is not required by any religion I'm aware of.

"Speaking truth to power" is what the left used to call it, in pursuit of some very worthy social change on race. It's way past time that pro-lifers work up a little nerve themselves and wrest the discussion from the abstract arguments and slogans of the abortion-on-demand extremists.

Truths spoken clearly are left to wander in the wilderness.
Truths spoken in banalities are given a seat at the table, though the table is devoted always and only to conversation of banalities, and never any true things.

John Kenneth Galbraith: “The man who makes things clear is a scab. He is criticized less for his clarity than for his treachery.”

Screwtape to Wormwood: “Jargon, not argument, is your best ally.”

If you need your ex-girlfriend or ex-boyfriend to come crawling back to you on their knees (even if they're dating somebody else now) you got to watch this video
right away...

(VIDEO) Why your ex will NEVER come back...