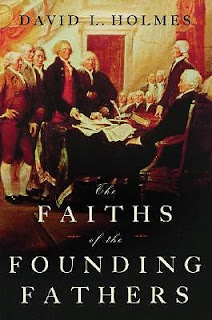 Awhile back I finished up reading David Holmes's excellent book Faiths of the Founding Fathers (Oxford University Press, 2006). I appreciate his balance and attention to detail throughout. He characterizes the major founders as falling into three basic patterns: orthodox Christians, Christian deists, and non-Christian deists. While Holmes’s division of the Founders into those broad theological categories has considerable merit, I think that his use of the term “deist” is a less than helpful choice to describe the theology of most of the Founders who weren’t orthodox Christians.

Those folks, as Gregg Frazer has argued in his book The Religious Beliefs of America's Founders (University of Kansas, 2014), are best thought of as rationalistic theists. Most of them believed, for example, in a God who is active in human affairs, who is to be worshipped and prayed to, who will judge each and every person after death, etc. Even the least conventionally religious of the major founders, Benjamin Franklin and Thomas Jefferson, affirmed such a deity. This isn't a "watchmaker god" or some uninterested deity such as posited by the Roman writer Lucretius. While there is no question that many of the Founders eschewed orthodox trinitarianism, their conception of God remained theistic rather than deistic in its main points. To continue to refer to such Founders as deists risks confusion in the minds of modern folks, many if not most of whom do not realize that the theology of many of the Founders, even the least conventionally religious, was far more conservative than the term "deism" would indicate. 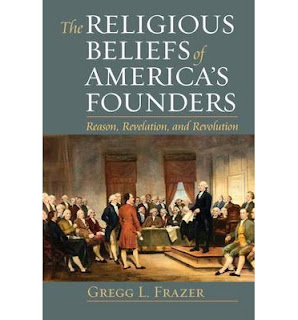 To expand on this point a bit, look at Benjamin Franklin. Franklin is generally acknowledged to one of the least religious of Founders. Early in his public career, he expressed in private correspondence to family members his own aversion to orthodoxy in religion and its professions of faith, particularly if such orthodoxy detracted from orthopraxy. As he wrote in a letter dated April 13, 1738:

I think vital Religion has always suffer'd, when Orthodoxy is more regarded than Virtue. And the Scripture assures me, that at the last Day, we shall not be examined [on] what we thought, but what we did; and our Recommendation will not be that we said Lord, Lord, but that we did good to our Fellow Creatures. See Matth. 26.

Franklin doesn't evidence a hostility for orthodoxy per se, simply orthodoxy that detracts from the cultivation of right conduct. Works were at the center of true religion for Franklin -- not to exclusion of belief in God, but as the foundation for how to determine if that belief was authentic.  And he cited to the Christian New Testament in support of his approach.

This approach to belief and works appears in Franklin's most well-developed articulation of his religious convictions, found in his Autobiography, an articulation that he referred to as "an intended Creed, continuing as I thought the Essentials of every known Religion, and being free of every thing that might shock the Professors of any Religion." Franklin then set forth this "Creed":

That there is one God who made all things. That he governs the World by his Providence. That he ought to be worshipped by Adoration, Prayer and Thanksgiving. But that the most acceptable Service of God is doing good to Man. That the Soul is immortal. And that God will certainly reward Virtue and punish Vice either here or hereafter.

Franklin's views on religious belief & the necessity of works are consistent over time. Far from evidencing a hostility or apathy towards religious life, his views manifest a concern that belief  evidence itself in the life of the individual, and that the virtues & vices of the individual are the basis for God's provision of rewards & punishments both in this life & the life to come. 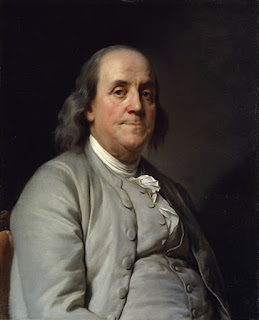 While Franklin's creed is not expressly Christian (and was not intended to be), it certainly is not incompatible with orthodox forms of Christianity. More to the point, his statement of belief should put to rest any talk of him not affirming a theistic belief system. Franklin's God is no absentee landlord, but is an active presence in the world, who not only creates but "governs the World" via divine Providence. This God is worthy of worship -- including prayer and thanksgiving, indicating that Franklin believed that God acted in the lives of individual people, hence the benefit of asking God for help (through prayer) & thanking Him for His blessings.

Most touchingly, Franklin insists on the importance of good works in human life.  The best way to serve this God is through good works that serve our fellow human beings, and that the judgment of each person's immortal soul will be based on what he or she has done in this life.

While not a churchgoer like George Washington, or a Hebrew scholar like James Madison, Franklin -- who attended no church regularly nor could read the biblical languages -- left a far clearer statement of faith than virtually any of the other Founders, Jefferson included.  And it was a statement of faith that affirmed an active, providential Creator, a deity who would sit in judgment upon all human beings, rewarding and punishing them according to the deeds they did in this life. Whatever Franklin’s faith may have been, it wasn’t a faith in a watchmaker or absentee God. 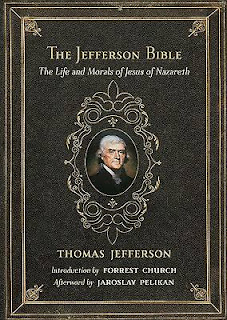 Look also at Thomas Jefferson's religious views as expressed in his Gospel harmony available widely online and in an edition published by Beacon Press in 1989 as The Jefferson Bible: The Life and Morals of Jesus of Nazareth. Two key points become clear upon reading Jefferson's version of the story of Jesus. First, while Jefferson removed the miraculous components from the early ministry of Jesus (no virgin birth, no resurrection, no signs and wonders), he kept the passages that deal with Christ's return to judge the living & the dead. Aside from this stunning piece of supernaturalism in Jefferson's work, Jefferson affirmed that human beings would in fact stand at a final judgment to answer for how they lived their lives. While Jefferson was a skeptic of the Resurrection of Christ, he affirmed the Second Coming.

Second, Jefferson affirmed the power of the prayer, and of God's care for those to who petition him in prayer. This is evident in Jefferson's version of the teaching of Jesus regarding the Lord's Prayer, which Jefferson left intact in his Gospel harmony. Surprisingly, in this part of his work, Jefferson did not remove or edit the explicit references to both the Father & the Holy Spirit in the teachings of Jesus. As far as I can tell, this is the only passage in The Jefferson Bible that refers to the Holy Spirit, let alone the procession of the Holy Spirit from the Father. As Jefferson renders that critical passage: "If ye then, being evil, know how to give good gifts to your children: how much more shall your heavenly Father give the Holy Spirit to them that ask him?"

Again, whatever Jefferson's faith may have been, those passages in his work indicate that he believed in a God who was considerably more active, responsive & involved that the word "deism" generally conveys. It is time to put the label "deist" away when referring to most of the American Founding Fathers.
Posted by Mark D. at 2:43 AM

A fair analysis, though I find the outliers Jefferson and Franklin less than helpful in surveying the religious landscape of the Founding era. That Jefferson took such pains to hide his heterodoxy throughout his public life indicates how out of step he was with the nation as a whole.

FTR, although Franklin thought diddling over dogma and doctrine a waste of time and effort, and in 1738 referenced good works in the story of the Sheep and the Goats per Matthew 26 [as did Jefferson http://americancreation.blogspot.com/2013/01/jesuss-second-coming-in-jefferson-bible.html]

You will see in this my notion of good works, that I am far from expecting to merit heaven by them. By heaven we understand a state of happiness, infinite in degree, and eternal in duration. I can do nothing to deserve such rewards. He that, for giving a draft of water to a thirsty person, should expect to be paid with a good plantation, would be modest in his demands, compared with those who think they deserve heaven for the little good they do on earth.

“My fundamental principle would be the reverse of Calvin’s, that we are to be saved by our good works which are within our power, and not by our faith which is not within our power.”


Although the two are routinely lumped together [properly] as perhaps the closest to actual deists among the Founders, upon further review they had little in common except for what they were not.

Tom, good observation -- I'm not arguing that Franklin or Jefferson are representative of the religious views of the country or even most of the Founders. My point is that even Franklin and Jefferson -- the least religious of the Founders -- are not Deists as that term is commonly understood. They are theists -- a step away from self-described Christian Unitarians like John & Abigail Adams.

Yes, I was pointing out that contemporary discussions of the "Founders' religion" invariably begin with the two biggest outliers! I think this is largely the result of ideological efforts in the academy to de-Christianize the Founding.

To me, the key question is whether folks believed the Bible is the work of God. I would say an overwhelming majority. Even Franklin thought it was a possibility.

[Jefferson, I think not.]

Even the Unitarians of the period were far more orthodox in terms of their views of the Bible than generally thought. What many people miss about 16th-late 18th century Unitarianism is that it based its rejection of trinitarian orthodoxy on a literal interpretation of the Bible. It was a refusal to accept the interpretation of the New Testament developed by the Church Fathers, the Schoolmen, the great Councils of the Catholic Church, and the confessional works of the Reformers. Instead, the Unitarians sought to interpret the Bible freshly, in light of what they thought was its plain meaning. They were, if anything, the fundamentalists of their day.

Jefferson -- it is very difficult to figure what his full beliefs were because he so very often couched what he said in vague terms or ambiguity. He was no friend of traditional religion, nor was he a believer in the inspiration of the Bible (his harmony of the Gospels demonstrates that).

Instead, the Unitarians sought to interpret the Bible freshly, in light of what they thought was its plain meaning. They were, if anything, the fundamentalists of their day.

Exactly. Why I have trouble with Gregg Frazer's proprietary meme, Theistic Rationalists™. You could also just call them Protestants.

Great post Mark. FTR, Frazer's "theistic rationalism" has Protestant Christianity as an element in the hybrid.

Thanks for that clarification, Jon. Frazer's book is great -- a real eye-opener about the nature of the discussions going on during the Founding period regarding God and religious faith. There is no question, as Frazer notes, that the theistic rationalists of the period were influenced by low-church Protestantism. Franklin, I think, is very close to the Christian Unitarianism that was common amongst the New England elite like John & Abigail Adams, for example. He's half-a-step away from it. Jefferson is farther away, but still the lingering influence of Protestantism is there. Thanks again for pointing out that Frazer makes that link.