Seth Barrett Tillman, Letter to the Editor, Taney was no champion of civil liberties: His worst decision was Dred Scott, but there were plenty of others, The Baltimore Sun, Feb. 24, 2016, 3:36 pm.

George Liebmann thinks Taney’s statue should remain on public display. Maybe it does; maybe it doesn’t. But the arguments Liebmann puts forward make a very poor defense for his position. 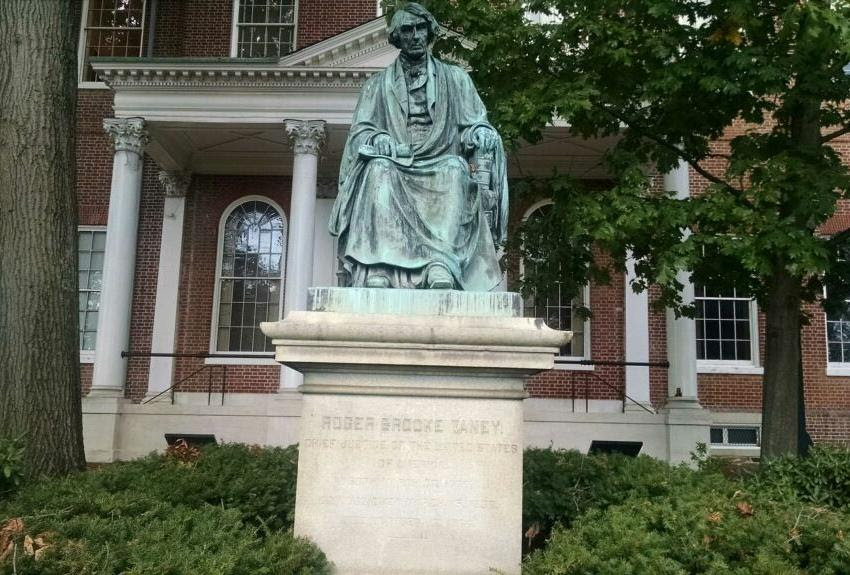 First, Liebmann tells us that Taney “died a poor man.” Taney was Chief Justice of the United States for over 25 years. During that time, he was paid a princely and regular salary of $5,000 per year, and $6,500 per year after 1855. At the time of Taney’s death, his savings, property, and other investments amounted to so little that the Maryland bar took a up a collection for his surviving daughters. Dying poor and leaving your children without means—when you had had many opportunities to do them well—is not a sign of virtue. It is a sign of neglect and irresponsibility.

Finally, Liebmann tells us that Dred Scott was not the sum total of Taney’s judicial achievement. Instead, Liebmann asks us to focus on Taney’s opinion in Ex parte Merryman (1861). But Merryman does not help Liebmann’s or Taney’s cause, and this is not surprising because very few commentators understand the case: including Liebmann.

In 1861, after Fort Sumter fell, the U.S. Army seized John Merryman, a Maryland citizen and state militia officer, and detained him in Fort McHenry, in Baltimore, Maryland. Merryman’s lawyers sought a writ of habeas corpus. After a hearing, Taney determined that the Army had violated the Constitution by seizing and detaining Merryman absent due process. Taney offered much flowing language—the sort which endears him to do-gooders and starry-eyed civil libertarians. But that is all that Taney did: He offered pieties in a judicial opinion. The reality is that Taney did not grant Merryman habeas corpus. In other words, Taney did not order the Army, or the commander at Fort McHenry (the named defendant in Ex parte Merryman), or the President, or anyone else to release Merryman from the Army’s prison. Now, perhaps the Army would not have obeyed any such a judicial order, but we will never know because Taney never issued one.

This reading of Merryman is not my idiosyncratic reading; rather, it is the position of several prominent modern commentators, including: Brian McGinty (2011), Bruce A. Ragsdale (2007), and Jack Stark (2002). Likewise, during the Civil War itself, several courts refused to order the Army to release civilians detained by the Army absent traditional due process. For example, Judge Betts, for the United States District Court for the Southern District of New York (1861), and Chief Justice Dixon, for the Supreme Court of Wisconsin (1863), offered detained Americans only civil-libertarian pieties in gracefully written opinions, but these judges granted detainees no actual concrete relief. None. Moreover, in order to justify their inaction, Betts and Dixon relied upon Taney’s Merryman opinion! In short, Merryman was a precedent for leaving those detained by the Army in jail; it was not grounds for any relief.

The bottom line is that those who value civil liberties during war time will find nothing of substance in Ex parte Merryman. Taney lived a long life and held a variety of state and federal offices. Perhaps he is deserving of a statue, and perhaps that statue deserves a public venue. Perhaps. But it is difficult to see how Ex parte Merryman makes that case.

Welcome Instapundit and Chicago Boyz readers. My co-bloggers have posted a lot of good material, so please have a look around.

Posted by Seth Barrett Tillman at 7:21 AM

Taney died October 12, 1864. That was 22 months after the Emancipation Proclimation, which I believe did not apply in Maryland. Manumission at that point, was not much of a gesture.