Gordon Wood on Freemasonry and the American founding 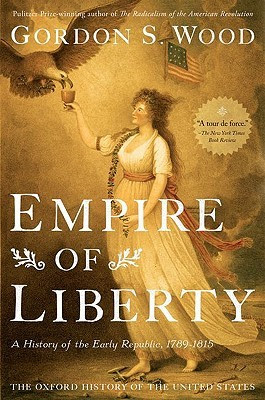 When it first hit print, I slowly worked my way through Gordon Wood's massive book on the post-revolutionary period in American history, Empire of Liberty (Oxford Univ. Press, 2009). The book demands slow reading -- each page is packed with detail and interpretation, and it is simply a joy to mull over Wood's insights. The book is a tome -- 738 pages excluding the biblographic essay -- but almost every page is a winner. Wood has put together a landmark book here, one that builds off of and massively expands upon his earlier work in Radicalism of the American Revolution. There was been quite a bit of some back and forth within the historical profession on the role that Freemasonry played in the American Founding. Wood addresses the question in the first part of his book, proposing that Masonry played a dual role as a source of unity in America and as a new religion designed to replace Christianity for those skeptical of Christianity's claims. His take on Masonry is set out on page 51 of the book:


Freemasonry was a surrogate religion for enlightened men suspicious of traditional Christianity. It offered ritual, mystery, and communality without the enthusiasm and sectarian bigotry of organized religion. But Masonry was not only an enlightened institution; with the Revolution, it became a republican one as well. As George Washington said, it was "a lodge for the virtues." As Masonic lodges had always been places where men who differed in everyday affairs -- politically, socially, even religiously -- could "all meet amicably, and converse sociably together." There in the lodges, the Masons told themselves, "we discover no estrangement of behavior, nor alienation of affection." Masonry had alway sought unity and harmony in a society increasingly diverse and fragmented. It traditionally had prided itself on being, as one Mason put it, "the Center of Union and the means of conciliating friendship among men that might otherwise have remained at perpetual distance."

As Wood makes clear, Masonry served a religious as well as a civic function. Its importance in the Founding Period was not simply social or political. It stood alongside Christianity as a source of religious values and perspective for many of the Founders.
Posted by Mark D. at 11:02 AM

Did you know that you can create short urls with Shortest and make dollars for every click on your shortened urls.