Two Constitutional Monologues Do Not Make a Dialogue 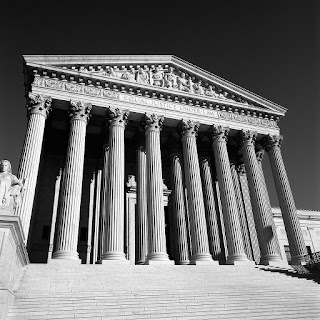 At some level, maybe Obama's onto something with all his executive orders and unilateral executive action. He claims -- disingenuously, I think -- he can't get a dialogue with Congress, so he just monologues into law. Despite the wail of constitutional conservatives, myself included, clearly the American people don't put much premium on it. Reminded of the three-branch model, the voting public clearly accepts some coloring outside the lines.

So why, then, do conservatives still expect to get return-on-investment by insisting the only way to challenge a Supreme Court decision is to amend the Constitution? This comes up in the debate over birthright citizenship. Frankly, I don't care much about the policy and would rather have this conversation over the Court's befuddling and tragic abortion precedent, but one must take civics lessons where one finds them. The precedent on the birthright citizenship question, based in the Fourteenth Amendment, is weak either way. (James Ho and John Eastman, both former Justice Thomas clerks, each vigorously represent the two opposing views.) Seems like a clear case where Congress could step in with its own independent take on the language in question: "All persons born or naturalized in the United States, and subject to the jurisdiction thereof, are citizens of the United States and of the State wherein they reside."

Yet most conservatives -- even many who desperately oppose illegal immigration and do not want the Fourteenth Amendment to support birthright citizenship -- assume this constitutional question must be settled by Court monologue. They take it as read that you have to send up a test case to the Supreme Court, and when it upholds birthright citizenship -- as it certainly will -- you're stuck with amending the Constitution. And on cue, they will cite hoary old Marbury to you, that "It is emphatically the province and duty of the Judicial Department to say what the law is." Then they will give you that self-satisfied look, as if to say, "I think I've made my point." For these "legends of our own time," as Hadley Arkes describes them, "Marbury v. Madison has come to mark the power of the Court to strike down an act of Congress as unconstitutional. More than that, it has been taken to establish this cardinal point: that the Supreme Court must stand as the sole authoritative interpreter of the Constitution."

"But," Arkes demurs, "that extravagant proposition is nowhere to be found in the text of Marshall's opinion in Marbury v. Madison." Arkes is right, as I will let him explain in a moment. But as a common-sense proposition, consider what it would mean if the Marbury hawks were right. The Constitution, they explain, makes the Court the sole expositor of the constitution, and we know that because the Court told us so, and it is the sole expositor of the Constitution. It is textbook circular reasoning.

Over a century later in 1927, writing for the majority in Adkins v. Children's Hospital, Justice Sutherland confirmed the point:

"From the authority to ascertain and determine the law in a given case, there necessarily results, in case of conflict, the duty to declare and enforce the rule of the supreme law and reject that of an inferior act of legislation, which, transcending the Constitution, is of no effect and binding on no one. This is not the exercise of a substantive power to review and nullify acts of Congress, for no such substantive power exists. It is simply a necessary concomitant of the power to hear and dispose of a case or controversy properly before the court, to the determination of which must be brought the text and measure of the law."


Thus, the "duty...to say what the law is" is not the same as the authority to dictate what the Constitution says. It simply makes the point that one branch cannot dictate hermeneutics to another. The example Arkes likes to use is that the Court may -- must -- independently access natural reasoning to discern that a new law that overcomes an earlier statute yet must also accede to an earlier constitution. To take an even simpler example, consider that the word "unconstitutional" never appears in the Constitution, yet the Court routinely and (sometimes) rightly strikes down acts of the people's legislatures on the basis of this invisible concept. These are concepts that transcend the Constitution. Yet they are something quite different from deciphering what "subject to the jurisdiction thereof" means.

O'Connor's dissent in City of Boerne v. Flores completes the circle, inviting Congress to join the Court in dialogue over the Constitution's meaning:

"This recognition does not, of course, in any way diminish Congress’ obligation to draw its own conclusions regarding the Constitution’s meaning. Congress, no less than this Court, is called upon to consider the requirements of the Constitution and to act in accordance with its dictates."

Of course, this invitation to collaborate in interpretation is not an invitation for Congress to exceed its powers, whether under Art. I sec. 8 or Am. V sec. 5, as O'Connor goes on to explain: "But when it enacts legislation in furtherance of its delegated powers, Congress must make its judgments consistent with this Court’s exposition of the Constitution and with the limits placed on its legislative authority by provisions such as the Fourteenth Amendment."

The point is, we're on dangerous ground if we've set up the Court as the divine last word on all matters of interpreting the Constitution. It puts too many issues too far away from regular lawmaking, and puts our policies out of step with other civilized countries (for example, on birthright citizenship and abortion). And it is particularly dangerous when lawyers and jurists have demonstrated a willingness to find a fully formed positive law in the Constitution, just waiting for the right plaintiff to midwife it into existence. That seems not very conservative to me, and even less sensible.
Posted by Tim Kowal at 1:55 PM

So why, then, do conservatives still expect to get return-on-investment by insisting the only way to challenge a Supreme Court decision is to amend the Constitution?

On the whole, true, however--especially since conservatives prefer not to destroy the social order to get their way. Gay marriage is now a fact, if only because reversing Obergefell would result in attempting to nullify 1000s of gay unions. So too, it's impossible to strip citizenship from 150 years worth of "birthright citizens," nor is it prudent to have the issue see-saw forever depending on which party controls the legislative process.

The conservative, who loves his country, hates and fears instability and anarchy more than bad laws. The leftist, of course, would rather cut the baby [or the country] in half, like in the old Bible story.

Solomon of course awarded the baby to the true mother who would rather lose the baby than see it killed. But in today's political-legal environment, we have to hand the baby over to the mother who does not love it, because the alternative is to let it be killed.

In this way, conservatives are at a structural advantage.

It is but superficial humility when the executive and legislature excessively "defer" to the Court. The result in belittling their duty to interpret the Constitution is to unite their powers and so to enlarge the federal government. And it is to deprive the Constitution of a point, for what point is there in electing leaders to interpret it when they defer totally to the unelected; and what point is there is amending the Constitution when Court decisions are deemed just as final and unchallengeable as anything in that fusty old parchment?

And if prudence be your touchstone, run -- run far, far away from a doctrine that lets the Court settle the greatest policy decisions for 320 million people for all time. Letting the Court settle abortion "rights" and put it out of touch of the people's representatives is what gives us most and most ghastly abortions in the developed world.

Prudence favors legislating citizenship for those already born here and appropriate new rules going forward. If the Court decides it's already settled the issue, let it say so. If its reasoning is sound, the legislature and executive can follow it. If not, it can carry on the dialogue. Why else does the Court fill pages with purported reasons for its decision? A king decrees; he babbles not. By honoring its tradition of giving reasons, the Court, even if unwittingly, honors its part in a conversation with those other institutions who together rule.

Perhaps you propose to bulwark the conservative cause by swelling the Court's power and praying it votes conservative. If we elect a conservative Republican president who bats better than average on appointments -- no Kennedys, no Souters, no O'Connors -- it'll indeed be the jackpot: upwards of four appointments! Seven conservative justices! Ready the cert petitions of war! Oh, but what are the chances, really, of a genuine rock-ribbed bench? Breyer'll probably hold on till the next president, and at least one of the appointments will be a lemon. And conservatives just don't wage lawfare like the radicals do. Best we'll do is hold the line a while.

And if we lose the presidency? Fin. And besides, how conservative is it, really, to play the winner-take-all game on all our rights-talk issues -- and let's face it, every issue boils down to some "right" or other -- by leaving it up to the Court to settle for all time? There is no reason -- certainly none in the Constitution -- that we should live under the absolute rule of the Court about whose decisions our elected branches have nothing to say.

"So why, then, do conservatives still expect to get return-on-investment by insisting the only way to challenge a Supreme Court decision is to amend the Constitution?"

Well, you're asking the wrong question because the truth is that we conservatives don't in fact do any such thing. Take a look at the slate of any session's cases before the Supreme Courts (state of federal) over the past ten years. They're chock full of challenges to consensus understanding of where SCOUTS sits on any number of important issues. Heck, look at the legislation passed in just the past five years that challenges Roe v. Wade.

It's not that we don't try to challenge SCOTUS decisions;we do, constantly It's that we're not very good at winning those battles, or at least we aren't very good at it at the moment. Passing amendments is something that's brought up only after we lose a battle that stings, and even then it's a pretty half-hearted rallying cry that gets thrown out with the trash within a month or so.

Why we aren't very good at winning those battles and how we might get better at doing so is a better and more honest question to be asking.

Note that the approach only works when it's one of Articles I II or III challenging another over the meaning of the Constitution. Congress might agree with the dicta in Wong Kim Ark on birthright citizenship. But if it doesn't, its not beholden to it (not even if it were the ratio decidendi). Come to think of it, the approach would seldom apply -- typically only where the Court limits Congress's power, a rare event. Conceivably, Congress could reenact DOMA, but the politics are cast.

Also, I was not suggesting that conservative have often tried amending the Constitution. Rather, conservatives TALK as though the only remedy is amendment. In the type of instances I just described, amendment is not necessary.