Chauvin: A jury of his peers?

NPR, March 11:  Several members of the jury pool in the Derek Chauvin case have said they fear retribution if they were to render an unpopular verdict 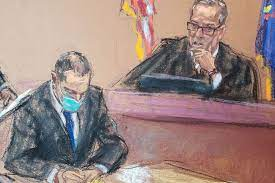 Regardless of the merits of the case against Derek Chauvin, there is certainly reasonable doubt about the makeup of the jury: The smart ones begged off--only those already disposed to convict would have readily agreed to serve in the Trial of the Century:

PROSPECTIVE JUROR 1: "The case itself is just very - this whole thing is just very divisive, and I'm not a divisive person. I don't - I just feel like - I'd just rather not be a part of something that's so two-sided."

And I certainly wouldn't risk myself and my family because my name got out that I voted not guilty.

PROSPECTIVE JUROR 2: "With a high-profile case, I know everything becomes public. So depending on what's ruled, that could be the problem later on down the line or even in the process."

Epilogue:  GUILTY ON ALL COUNTS

Alt. juror in Chauvin trial on mob: ‘I was concerned they would come to my house’

KARE-TV 11’s Lou Raguse shared online that the jurors were so intimidated that they didn’t even share their real names with each other.

He tweeted: “This was shocking to me, but Christensen told me she and the other jurors didn’t even share their real names and occupations with each other. Just called each other by juror number. Got along but mostly made small talk. Concerned about saying too much.'”

“I had mixed feelings,” she said. “I did not want to go through rioting and destruction again, and I was concerned about people coming to my house if they were not happy with the verdict.”