Election Fraud Is Not Funny

For the record, I posted my essay "2020 Election Winner: Trumpism" early Saturday morning, November 7, 2020, before turning to the news that media organs were calling the election for Biden. I do not know if any of our "news" sources (I have come around to Trump's view they are, indeed, the enemy of the people, particularly now that China is smearing us in the UN with the fatuous "systemic racism" tropes supplied by the American media) had begun "calling" the election at the time I published. But my essay WAS NOT, and IS NOT, a concession to those reports. 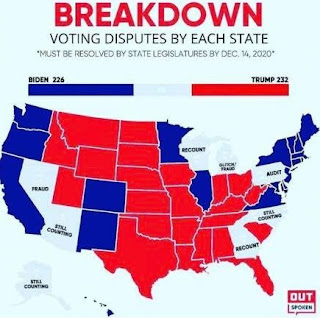 I do not know what affirmatively to believe about this election's results. But I saw an enormous amount of enthusiasm for Trump, and I saw none for Biden. I saw unprecedented numbers of people happy with Trump's accomplishments -- including minorities malnourished on decades of empty Democrat promises -- and I saw none for Biden's. I saw an unbroken string of failures by Biden-friendly pollsters and Biden-friendly news reporters about the election. I have seen an endless stream of reports of suspicious voting activity. I have seen an almost daily record of news stories and American voices -- some supporting the President, some merely critical of Biden -- censored by news and social media, like Jack Dorsey's news-and-porn group blog.

We have seen significant voter fraud in many recent modern elections, though in less consequential doses. Almost invariably, the Democrat media think voter fraud is a joke.

Well, I am not laughing. And I do not think very many Americans think it is funny, either. There is a reason we are punctilious about the customs in our democratic institutions. There is a reason judges wear robes -- to symbolize their impartiality. There is a reason courtrooms have wood-paneling and high ceilings and a bench and a well and a galley -- they are solemn and ordered public ceremonies. There is a reason why we vote in public, in our own neighborhoods, and why voting by mail is an exception, not a rule -- because voting is a community ceremony, in which we all participate openly, and to which we all bear witness. There is a reason the gold-standard of tallying votes is by hand-counting -- because at bottom, a democracy is fashioned by hand, not by machines, and certainly not machines programmed by Canucks.

Too many of our ancient norms were abandoned and replaced far too quickly to escape our notice this time. This election was not regular.

And it is not funny. If Democrats and media wished Americans would believe they were on the level when they called the election for Biden, they needed to wipe the smirk off their faces and play it straight about election fraud a long time before they embarrassed themselves for three years over a hundred grand of Facebook ads.

Based on all that, I have decided, for now at least, that I cannot cast my belief in favor of those who say this election is over. I support the legal challenges to shed a light on the suspicious events surrounding this election. As the Democrats and Blue-Check news-and-porn blog reporters blared for three years of Trump's term, fraudulent elections put our democracy at stake. Democrats' evidence was bullspit, but Americans took the major premise deadly serious.

They still do. Stop acting so surprised.