Trump the Grey Has Fallen

"There are three powers, three powers alone, able to conquer and to hold captive forever the conscience of these impotent rebels for their happiness—those forces are miracle, mystery, and authority. Thou hast rejected all three and hast set the example for doing so. When the wise and dread spirit set thee on the pinnacle of the temple and said to thee,“If thou wouldst know whether thou art the Son of God then cast thyself down, for it is written: the angels shall hold him up lest he fall and bruise himself, and thou shalt know then whether thou art the Son of God and shalt prove then how great is thy faith in thy Father.” But thou didst refuse and wouldst not cast thyself down.

—Fyodor Dostoyevsky, 'The Grand Inquisitor' from The Brothers Karamazov (1880).

‘Come, Gandalf,  tell us how you fared with the Balrog!’

"We fought far under the living earth, where time is not counted. Ever he clutched me, and ever I hewed him, till at last he fled into dark tunnels. ... In that despair my enemy was my only hope, and I pursued him, clutching at his heel. Thus he brought me back at last ...."

My own hunch is Trump has in mind for himself a role something like that of Gandalf the Grey: to go away for a while and defeat the Covid Balrog, and to return in our darkest hour, having forced us to consider seriously the prospect of "a Harris administration, together with Joe Biden"; to wander toward ruin; to weep in our despair. 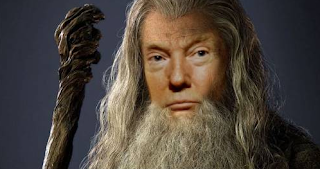 The left means to rule by mystery and authority. Through "social justice," "experts," "fact-checkers," and crisis fiat governance, their project is all but achieved. But Trump may have one of the ancient tricks still up his sleeve: to perform a miracle.