Is America's "soul" up for election? What if it loses?

Politics used to be about things like tax cuts. When politics was about tax cuts and subsidies and spending on projects and putting a stop sign at the end of the street, Americans could bear to get a little more or a little less from election to election. An election result could be disappointing. But it was not catastrophic. Quality of life is very important to Americans. But quality of life is not all-important. Americans will argue with each other over quality-of-life issues. But they will not kill each other over them. Settling things like tax cuts through elections worked out just fine.

Which leads to the larger reason causes like these cannot be settled by vote: Causes like these bear too great a resemblance to religion -- the nature of man, his original sin, his fallenness, and his salvation from it. Politics cannot settle disputes over dogma. They are neither soluble nor dissoluble.

Elections cannot decide causes like these. Yet these causes dominate 2020 election journalism. The 2020 election is not about quality of life. In fact, it is not about life at all. In 2020, the election is about our "soul." Democratic presidential nominee Joe Biden says this election is a "battle for the soul of the nation." He has said it repeatedly and prominently. Senator Kamala Harris independently has said the same thing, even before receiving the nod for vice-presidential nominee: "The task is to fight for the soul of our country."

Supposing Joe's instincts are slipping? Supposing Kamala is making up for her lack of substance? Think again. Spencer Critchley, a consultant on the successful 2008 and 2012 Obama campaigns agrees that treating politics in the traditional way, as a way to solve problems, is for suckers. "There is more to life than reason, and people are not motivated by data," says Critchley. "They are motivated by matters of the heart and the soul."

But supposing the Biden/Harris team is right: If America's very soul is indeed up for election, what if it loses?

Contests over souls, history tells us, are not very nice. The Romans' persecution of the early Christians "was a natural response," wrote Rowan A. Greer, because "[t]he Roman world rightly saw that one possible implication of Christianity was a rejection of the social order." And centuries later, after the Roman world gave way to the Christian world, many Christians, such as King St. Louis IX, still saw the matter much the way their former persecutors had:

St. Louis advised his people not to discuss religion with Jews; “the layman,” he told Joinville, “when he hears any speak ill of the Christian faith, should defend it not with words but with the sword, which he should thrust into the other’s belly as far as it will go.” 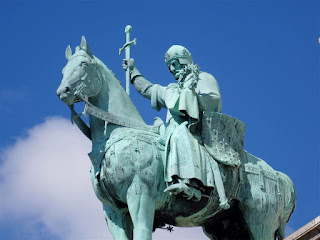 (To those with the spittle for it, Chesterton had it that the pious king's counsel was to argue with infidels "on the reasons of the philosophers themselves," as a real philosopher can argue. But failing that, Louis concluded, all that remained was to "thrust a sword through his body as far as it will go.")

Even by the 18th century, the great English man of letters Samuel Johnson thought matters of the soul were worth dying for. "In short, Sir, I have got no further than this: Every man has a right to utter what he thinks truth, and every other man has a right to knock him down for it. Martyrdom is the test." Johnson believed the state had a right to regulate the religion of the people, for the upbringing of children. Johnson was reminding a clergyman supportive of this right that he may not so readily agree with it should he travel in a state committed to exercising the same right, but on behalf of a different religion.

Which we may take to mean: all causes are not equal. Some causes are sensible. Some causes are bosh. Some are merely useful. Some are profound. And some hold the key to everlasting life. Johnson thought the state had a role to play in ordering ideas and causes, prioritizing them, and as to those responsible for holding the social order intact, ensuring their survival. But: so does the individual have a role. Some ideas are worth dying for. But how would we ever know which ones, if no one volunteers for the demonstration?  Anyone may be willing to kill for their ideas. But how many are willing to die for them?

Awaiting us at the end of argument is sometimes agreement, though rarely. More commonly we may try to reach compromise; or failing that, tolerance. But lest we forget: also awaiting us may be intolerance: our fellow may choose to knock us down for our beliefs. We might well give a thought to what we are prepared to do then.

Margaret Thatcher and Enoch Powell debated this on the eve of Argentina's invasion of the Falklands. The Prime Minister is reported to have spoken about the Christian concept of the just war and Western values. To which Powell responded, "We do not fight for values," and "I would fight for this country even if it had a Communist government." Thatcher disagreed: "If I send British troops abroad, it will be to defend our values." The last word recorded of this exchange is Powell's: "No, Prime Minister, values exist in a transcendental realm, beyond space and time. They can neither be fought for, nor destroyed."

Now, to fight for something requires a loyalty to it. I do not know on what loyalty depends. But it is not dependent upon something so abstract as values, is what Powell was telling Thatcher. Powell was saying that, when a man is called to fight for his country, he does not ask for a moment to consider what values are espoused in the nation's party platforms of the most recent election, or in the nation's high court decisions of the most recent term, or in the newspapers of that very morning. He does not consider who won the last election. He fights for his country for the same reason he fights for his family.

There are some things -- religion, perhaps little else -- that are so wrapped up in a man's being that he cannot be expected to suffer undue challenge to his practice and belief. As St. Louis suggested, if religion is to be put to the test, parley is reserved for the philosopher and the saint; for the rest, however, for those who grasp the eternal weight of the stakes, he must evade, seek refuge, and, if pursued and cornered into the last redoubt, then, at the last, to turn, and to fight, to the mortal death. The words Robert Bolt placed in the mouth of Sir Thomas More on this subject, in his 1960 play A Man for All Seasons, were these:

MORE Now listen, Will. And, Meg, you listen, too, you know I know you well. God made the angels to show him splendor -- as he made animals for innocence and plants for their simplicity. But Man he made to serve him wittily, in the tangle of his mind! If he suffers us to fall to such a case that there is no escaping, then we may stand to our tackle as best we can, and yes, Will, then we may clamor like champions . . . if we have the spittle for it. And no doubt it delights God to see splendor where He only looked for complexity. But it's God's part, not our own, to bring ourselves to that extremity! Our natural business lies in escaping, so let's get home and study this Bill.

Thomas More was expected to swear an oath to support the marriage of King Henry to Anne Boleyn. This, More knew, he could not do without violence to his allegiance to his faith, which he held higher than his allegiance to earthly authority. In the end, More was willing to suffer death for his loyalty. Yet, he did not relish it, and sought to avoid the ultimate decision, if he could.

Joe Biden and Kamala Harris sound as though they are ready to put Americans to a similar decision. Perhaps, in some ways, even a more terrible decision. For St. Louis, and Dr. Johnson, and King Henry all presumed that a man who withheld his loyalty from the state for the sake of his soul, though his life be lost, may still keep his soul for God. That, at least, was beyond the reach of any earthly sovereign.

But for a godless state, no such respite exists. Since Nietzche, the state is not limited to having men's lives only. The consummate statesman may now command his very soul. His ultimate arbiter is History, whose judgment rolls, inscribed by newsroom priests and university monks, record severe judgments and odium theologicum against apostates and infidels. History, the Biden/Harris ticket will have you know, shall condemn the souls of those who do not vote Democrat.

Their eyes have seen the coming of electoral reward;
They will trample out the vintage where the grapes of wrath are stored;
They will loose the fateful lightnings of their terrible swift sword;
Their truth is marching on.

To (biden)-Harris, salvation is SUBMISSION.

Submission to the values and diktats of the ruling elite, as though theirs is The One and Only True Way All Good People Think. Individual liberty and individual initiative are all to be subordinated to this, with the primary responsibility of the individual being reduced to mere OBEDIENCE.

And Richie, the real problem is that we are to be obedient to a set of values that have no eternal basis. So like the covid-19 "rules" change as is desired by our betters. Everything is written in sand.

You asked what happens if America loses the battle for its soul. It seems to be this passage from the Bible answers the question:

"This is what the Lord Almighty, the God of Israel, says: 'Listen! I am going to bring a disaster on this place that will make the ears of everyone who hears of it tingle. For they have forsaken me and made this a place of foreign gods; they have burned incense in it to gods that neither they nor their ancestors nor the kings of Judah ever knew, and they have filled this place with the blood of the innocent. They have built the high places of Baal to burn their children in the fire as offerings to Baal—something I did not command or mention, nor did it enter my mind. So beware, the days are coming, declares the Lord, when people will no longer call this place Topheth or the Valley of Ben Hinnom, but the Valley of Slaughter. In this place I will ruin the plans of Judah and Jerusalem. I will make them fall by the sword before their enemies, at the hands of those who want to kill them, and I will give their carcasses as food to the birds and the wild animals.'"

This is why the election of the POTUS and approval of SCOTUS nominees are considered worth a death match. Such a concentration of government power over daily life is a constant ratcheting towards despotism with the lust for power attracting the worst of sociopaths. This, as a system of government by "causes", cannot be allowed to continue . . .