The Doctor-Policeman Will See You Now

"Of all tyrannies, a tyranny exercised for the good of its victims may be the most oppressive. It may be better to live under robber barons than under omnipotent moral busybodies. The robber baron's cruelty may sometimes sleep, his cupidity may at some point be satiated; but those who torment us for our own good will torment us without end, for they do so with the approval of their own conscience." C.S. Lewis

Sure enough, recent news on the health-guidelines enforcement front should see the robber barons' reputations improving by comparison:
If you don't like a doctor's advice, there are other doctors. If you don't like the laws, you may, at least, vote for new ones. But what relief is there from Doctor-Policeman? Doctor-Policeman brooks no exemptions. Accepts no substitutes. Suffers no dissent. And having deputized your neighbors, Doctor-Policeman has eyes everywhere.
A year ago, I shared this quote from Alan Bloom's The Closing of the American Mind, anticipating such a figure as Doctor Fauci and all his public health official colleagues who would impose their will upon us -- though we did not elect them -- on authority of their medical judgment -- though we are not their patients:

"Doctor and policeman, enhanced by the application of science to their endeavors, were to be the foundations of a wholly new political undertaking. If the pursuit of health and safety were to absorb men and they were led to recognize the connection between their preservation and science, the harmony between theory and practice would be established. The actual rulers, after a couple of centuries of astute propaganda directing popular passions against throne and altar, would in the long run be constrained by their subjects and would have to enact the scientists’ project. The scientists would, to use Harvey Mansfield’s formula, be the hidden rulers. The ends pursued by politicians and the means they use would be determined by philosophers. Scientists would be free and get support, and scientific progress would be identical to political progress so conceived."

In other words, the people cannot possibly understand the policies needed to enact utopianism, thus the people should be conditioned to just trust scientists, as they once trusted their priests and ministers, whose conclusions could then be enacted without fuss.
I commented that, while one may object that the interests of a recalcitrant people -- of Populists -- may not be very nice, and have led to endless wars throughout human history, the Populist at least may answer: we have survived. What we more nearly did not survive, and still might not survive, is the rule of the Philosopher, the hidden ruler...the Doctor-Policeman. "I doubt," said Tom Wolfe, "that any Calvinist of the sixteenth century ever believed so completely in predestination as these, the hottest and most intensely rational young scientists in the United States at the end of the twentieth."
Or as Andy Rooney said: "When I talk politics with a doctor, I wonder how they haven't killed all their patients." 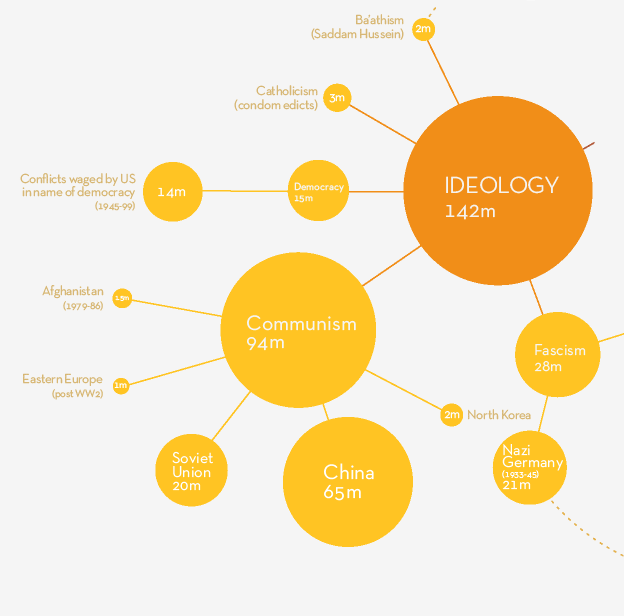 Communism Kills.
One cannot expect total compliance from a free people. Particularly compliance to orders issued by persons that never appeared on a ballot. About 80 to 90% compliance is about the best one can ever hope to achieve. Oh, you will get close to 100% of pretended compliance, of gestures toward compliance: the shopkeeps will display the appropriate signs in the window to draw away suspicion, as the Jews of Europe, and the Armenians of Turkey, and the Czechs under communism, had learned to do. But all around there are glitches in the matrix: the man wearing his mask around his chin, or under his nose; the woman who, upon being asked by a clerk to wear a mask, feigns forgetfulness as she reaches, resignedly, into her purse; the mother who pretends not to see the "park closed" signs, and lets her children play in the sunshine anyway.
At any rate, we have achieved sufficient compliance on the mask-wearing front. To insist on 100% compliance is to lead where people will not follow.
Nor should we wish to achieve better than that. You will not find agreement above 80 to 90% across all Americans on nearly any issue of significance. That is to the good. The absence of dissent should be more horrifying than the absence of a mask here or there. The absence of dissent implies the existence of speakeasies, of an underground. The absence of dissent implies the brewing of violence. A man will argue for his beliefs. But if a man may not argue for his beliefs, well... then he can only fight for them.
The zero-tolerance policy against breaking the advice of Dr. Fauci and all his regional mini-me health officials is not sound leadership. But then again, it is not intended as leadership. It is intended as power -- the final, perfected form of power: Power without review, without rival -- power without dissent.
Ok now, you may feel a slight pinch....
Posted by Tim Kowal at 10:13 PM

"For example, front-of-house staff in restaurants who choose to wear face shields must now wear them upside down so that they are attached at the collar instead of the forehead, so that their breath is directed up, not down"

And, vaccination will be made compulsory, so that the oft repeated refrain".. otherwise you will be killing your parents by infecting them"