All the ruffians do what he says; and what he says is mostly: hack, burn, and ruin; and now it’s come to killing. There’s no longer even any bad sense in it. They cut down trees and let ’em lie, they burn houses and build no more.

My children's favorite chapters from Tolkien's The Return of the King did not make the cut for the blockbuster film adaptation. After the simple hobbits saved Middle Earth by defeating the evil of the stinking, smoking land of Mordor, they returned home to find the Shire terrorized by the wizard Saruman's ruffians, who had knocked down the hobbits' buildings, trees, and monuments, for no other reason than to remove all markers of memory. For a people without pride of place is less likely to defend that place. The trees of the Shire were not just bark and branches, they are where children climbed and hunted, and under whose leaves the people gathered to enjoy warm August nights. A homeland denuded of monuments is just a zip code, and its people mere names in a phone book. "‘This is worse than Mordor!’ said Sam. ‘Much worse in a way. It comes home to you, as they say; because it is home, and you remember it before it was all ruined.’"
A little bit of Mordor is coming home to us in America. The list of our monuments defaced, displaced, or destroyed in this riot season alone is long and still running, but already includes such figures as Thomas Jefferson (who wrote the Declaration of Independence), George Washington (the father of our country who freed his slaves upon his death), Junipero Serra (who founded the California missions), and Cervantes (who was himself held as a slave). They have toppled Ulysses S. Grant, whom Frederick Douglass eulogized as “a man too broad for prejudice, too humane to despise the humblest, too great to be small at any point. In him the Negro found a protector, the Indian a friend, a vanquished foe a brother, an imperiled nation a savior.” The first American progressive president, Teddy Roosevelt, is no longer welcome. Across the pond, even Winston Churchill is far from safe.
The message is clear. It is not the monuments they hate. It is the people who revere them.
Scanning the comments of this campaign, some of the ruffians -- most of whom appear to be young, white college graduates -- still attempt to justify the monument toppling on the basis that the monuments represent historical figures of impure virtue. Though at the above examples, the strain of this exercise becomes too great. Instead, more radicals are adopting the breezier stance of rejecting the very idea of statues. Why should we have statues at all? they proclaim. In this they are hitting rather closer to the spirit of Mordor: That a people should love their homeland is itself contemptible. It stands against the ruffians' will to rule us. The ruffians slash and burn not because they love something, but because we do.
Our monuments are us. A people who will not object to their monuments being toppled and erased will not very strongly object to themselves being toppled and erased.
Our ruffians and their wizards, produced at our elite institutions, have been miffed at our statues for a long time. In the 1980s, the first prize for a competition to create a monument to the perished soldiers of the Vietnam war was awarded not to an artist, but to an architect, Maya Lin, who had chosen to honor our country's dead with an enormous phone book -- a flat surface coldly listing the names of dead soldiers. The work is a surgical deconstruction of the soldiers' lives and sacrifice: their deaths are worth nothing, and so their lives are worth nothing. For Lin, art was an act of destruction, a gash in the ground, an open wound. 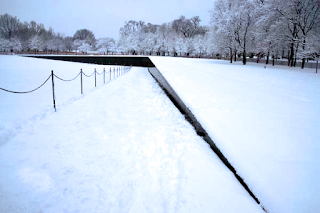 Veterans were so upset by the ghoulishness of the work that sculptor Frederick Hart was commissioned to contribute his work, Three Soldiers, for display at the memorial as well. Lin reportedly was annoyed at having to share the memorial with a sculpture. Amusingly, upon seeing Three Soldiers, Lin asked Hart if his models had complained of any pain. Pain? asked Hart. Yes, when you removed the plaster from their bodies. Apparently, Lin had assumed he'd used wet plaster to cast his models, rather than to actual sculpt the works. Lin was incapable of imagining that remembering a person should require the artist to care about him. 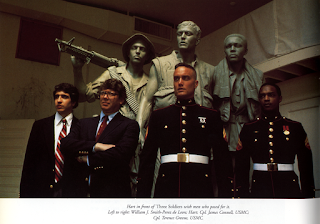 Hart posing with the three soldiers depicted in Three Soldiers.
The statue topplers of 2020 carry on Lin's contempt, and with nearly as much skill.
Americans love their statues. They love their history. They love their country. They love it not because it is perfect, but because it is theirs. The conceit of the monument topplers is that a country is just another consumer product. "The assumption," G.K. Chesterton once put it, is that one may criticize a place "as if he were house-hunting, as if he were being shown over a new suite of apartments." This is nonsense, because:

And because we love our country, we love those who founded it, and those who defended it. We love them not because they are perfect, for if they were perfect, they would be imposters -- or we would. They were not some alien race. They were flawed humans, as are we. When we condemn the imperfections in others, we condemn ourselves.  We accept these flaws, Chesterton said, not out of optimism, but out of patriotism. "It is a matter of primary loyalty. The world is not a lodging-house at Brighton, which we are to leave because it is miserable. It is the fortress of our family, with the flag flying on the turret, and the more miserable it is the less we should leave it." In the final chapters of The Return of the King not depicted in the film, Merry and Pippin, who had been louts and miscreants before following Sam and Frodo into war merely for the sake of friendship, returned skilled and courageous warriors, capable of raising their Shirefolk into a successful campaign to rout the ruffians and run them out of their homes. Through their love of their friends and their homeland, Merry and Pippin attained marshal virtues, and became unlikely heroes.
Not only do we not turn out our monuments, we do not even turn out our topplers. And for the same reason. For in them moves the same spirit, though twisted and corrupted by vice and viciousness, that moves in us. As our monuments teach us, moments of honor shine even through sinful and wretched creatures, and just as the attainment of virtue does not secure against decline into vice, even one who is mired in vice may yet be saved, and bring honor to himself and his people. In The Return of the King, when the hobbits overthrow Saruman and turn him out of the Shire, Frodo stops his angry Shirefolk from killing him. For "[h]e was great once," Frodo tells them, "of a noble kind that we should not dare to raise our hands against. He is fallen, and his cure is beyond us; but I would still spare him, in the hope that he may find it." If we reject the possibility of redemption in who helped create and shape our country, do we not reject the possibility of redemption in the country itself?
To keep the great deeds of our history alive was the last charge Frodo gave to Sam: to "keep alive the memory of the age that is gone, so that people will remember the Great Danger and so love their beloved land all the more."
Leading up to his first inaugural, President-elect Barack Obama said, "What is required is a new declaration of independence," through "an appeal not to our easy instincts but to our better angels." He went on to implore: "Let's all of us do our part to rebuild this country." But our heroes are created out of flawed mediums. And that flawed medium is the message. Obama would write our ideals on lifeless stone, as Lin wrote the names of our war dead, while frowning at the statue of the soldiers who remind us of the flesh and blood who lived, and who fought, and who died, for their country, and for us. If you wish to destroy the message, start by destroying the medium -- the stories and images of the lives who saved us from the Great Dangers to secure our beloved land.
Those who topple our statues have in mind to topple us. We must rouse ourselves against them.

Very nice. Actually, painful. The Lin "monument" is a perfect metaphor for the modernist project, as CS Lewis put it, to create Men Without Chests, clever walking calculators with no sentiments or emotions.

"In a sort of ghastly simplicity we remove the organ and demand the function. We make men without chests and expect of them virtue and enterprise. We laugh at honour and are shocked to find traitors in our midst. We castrate and bid the geldings be fruitful."

It is never the right hill to die upon. Just let them have this hill and then we will have peace. But we are never told: what about our country and culture do they mean to leave alone? Anything?

When they say "This is not the hill to die on," what we begin to hear is, "There is no hill in this land worth fighting for."

Sadly, you are correct