The Union attack on Atlanta, November 1864: 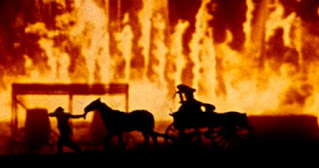 Image from Gone with the Wind
Atlantans' attack on Atlanta, June 2020: 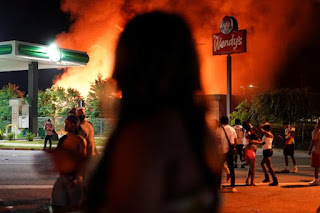 Image via Reuters
Five years ago I wrote this:

Gone With the Wind is still Americans' all-time favorite film, for example, despite being made a 'hundred years' ago in 1939 about the Civil War a 'hundred years' before that. The themes of community, honor, culture, love, war, and loss of the 19th century still connect through a story told in the 20th century to us now in the 21st. It's a great service movie-making does to put the history of each preceding generation on screen, to give a sense of our continuity and proximity.

Amazon recently removed Gone with the Wind from its streaming service. The film's themes of community, honor, culture, love, war, and loss, from Amazon's perspective, are no longer licit in the 21st century.
But the burning: it seems we will stick with the burning.
Posted by Tim Kowal at 11:12 AM