Reflections on the Revolution in the UK: Part 3: Farage’s Poster Is Racist

Reflections on the Revolution in the UK

Farage’s Poster Is Racist
Let’s talk about racism: everyone else has. Here is Farage’s poster: 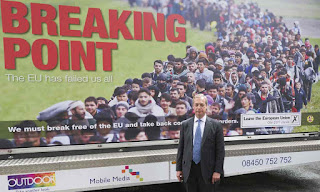 Farage was called a racist (and worse [1 minute mark]) for this poster.

In other words, if you reproduce a photograph of an actual, recent event, you are a racist. You can even be reported by your political opponents to the police for allegedly inciting “racial hatred,” and then the press will dutifully take notice. See Heather Stewart & Rowena Maso, Nigel Farage’s anti-migrant poster reported to police, The Guardian, June 16, 2016; Jonathan Jones, Farage’s poster is the visual equivalent of Enoch Powell’s ‘rivers of blood’ speech, The Guardian, June 16, 2016.

Orwell’s Ministry of Truth is jealous.

The racism charge (such as it is) against Farage’s photograph takes 3 distinct forms. First, the photograph is from far distant Slovenia, and so it should have had no role in the U.K.’s in-out EU referendum. If it has no legitimate role in public debate, then it must be appealing to base, racist sentiment. Exactly, who here is the “Little Englander”? Slovenia is an EU member state. If the U.K. is in the EU, then what goes on anywhere in the EU is of interest to U.K. citizens and affects their interests in every respect, particularly given EU free movement principles. Whether the U.K. remains and should remain in the EU has everything to do with what is going on in and across the EU, even if not in the U.K. or directly on the U.K.’s borders.

The second argument is that this photograph does not tell the whole story: roughly ½ of the (non-British net) migration to the U.K. is from nationals of other EU member states, as opposed to refugees and economic immigrants from the Third World and war zones. In other words, because Farage’s photograph has not captured every nuance of every type of immigration, because it is not representative in every respect in relation to a complex global phenomenon, the photograph must be an attempt to gain support via base, racist sentiment. The proper response is that few photographs (if any) can capture every nuance of any global phenomenon; likewise, the two types of immigration—i.e., EU and non-EU immigration—reaching the U.K. are substantially different phenomena.* If Farage’s photograph meaningfully captures a facet of one of those two realities, then claims of racism are wholly misplaced. Likewise, many U.K. voters are not comforted by the fact that, during 2015, in addition to 190,000 (non-British) non-EU migrants to the UK, there were another 180,000 (non-British) EU migrants to the U.K. So if Farage had shown two photographs, side-by-side, illustrating each of the two types of immigration, it is hardly clear that the additional photograph might have been understood differently by the voting public.

The final argument against Farage’s photograph is that these people are dark skinned. As John Jones, in The Guardian, wrote: “This tide of faces [in the photograph] summons up ... swarms and rivers and hordes of otherness and racial difference.” Huh? An accurate photograph summons up racial difference? Here we come to the crux. There are millions of U.K. citizens today in Britain who are not ethnically English, Welsh, Scottish, or Irish (as in Northern Ireland). Many are immigrants or the children of immigrants, such as Sadiq Khan, the newly elected mayor of London. Why would Jones believe that such people detect “otherness” or “racial difference”? Jones’ statement simply dehumanizes these people and denies them their shared U.K. identity. As for others, including people who are ethnically English, Welsh, Scottish, and Northern Irish—is Jones telling us that these people will negatively respond to “otherness” and “racial differences”. I am saddened to say that that is precisely Jones’ point. In other words, here we have a member of the elite media telling us that a large segment of his fellow countrymen are not only incipient racists, but d-u-m-b people, easily led astray by a purportedly emotionally charged photograph. Jones supplies no empirical basis for this position. What do we call that—promoting negative views of large groups of people, based on inherited traits, such as ethnicity, absent any empirical support? What do we call the people that do this?

This photograph does teach us something about bigotry, prejudice, and stereotyping. There are some in the Remain camp and the elite media who think many U.K. voters are racist or dumb or both, particularly if they have the “wrong” ethnicity. Exactly who here is the racist?

Is it any wonder that so many have voted “Leave”?

* EU immigrants to the U.K. come with passports and/or other identification papers. Immigrants from Syria, the Third World, and war zones frequently have no such papers.

My prior Brext posts include:
Seth Barrett Tillman, Reflections on the Revolution in the UK: Part 2: The U.K.’s Bradley/Wilder Effect Is Enough To Swing Elections, The New Reform Club (June 30, 2016, 3:54 AM); and,

Posted by Seth Barrett Tillman at 3:02 AM

>>Exactly who here is the racist?

When white men view charges of racism as tyranny, the transnational progressive game is up.

And the Farage poster charges are making that day come sooner rather than later.

In other words, if you reproduce a photograph of an actual, recent event, you are a racist.