This is a picture of an exhibit at the British Museum. It is titled: “Islam and Europe”. 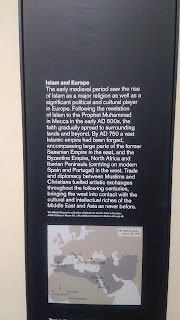 It says: “Following the revelation of Islam to the Prophet Muhammad ....”

Posted by Seth Barrett Tillman at 10:24 AM

i see their dhimmi is showing.

I'm sure there's another display on how Jesus rose from the dead.

It turns out that the latest scholarship reveals that Muhammad did not exist, and that the koran is a bastardized Christian text, that was not even written in Arabic.

Yes, the same happened in the first "Bedazzled" movie with Dudley Moore and Peter Cooke portraying nuns of the Order of Saint Beryl, or the Leaping Beryllians, celebrating "her great feet."

It would be inappropriate even if true, and it's not.

Why are Western secular humanists so attracted to Islam? Surely they know that they would be suppressed under sharia law. Well, they harbor a death wish in any event.

But in addition, they see a kindred spirit in Islam, both in revolt against Judeo-Christian revelation, faith and ethics - - my enemy's enemy must be my friend.

Not something that I want to be part of. Make America Great Again!

From decades of observation I can conclude that:

1) Leftists hatred for Christianity is all consuming and they would rather deal with the devil than abandon that hatred.

2) Leftists are nihilists at heart and yearn for the destruction of the west and the rest of the world.

British museum is afraid of being burned down.

Does the exhibit include a painting showing the "revelation of Islam to the Prophet Mohammed" (PBUH)? Because if there ain't a picture it didn't happen.

So Islam gradually "spread." Completely peacefully, of course. It might have gotten farther if Charles Martel hadn't diverted the Muslims with a magic show and free popcorn at Tours.

What absolute bullshit, PC historical revisionism. Islam spread by fire and sword. When they conquered Constantinople they came in contact with Western Platonic thought and early science. Some of their Imans, the Mu'tazilites were impressed (with the idea that God was a Rational Being, who created all that exists around a set of discernible and immutable rules) and embraced this, and were able to hold sway over the Caliphs from 827 until the second year of the reign of Caliph Ja'afar al-Mutawakkil (847-861), when a rival, conservative group of Imans, the Ash'arites, prevailed upon the Caliph to have the Mu'tazilite position declared anathema, thereby forcing the Muslim world to, intellectually, remain in the 10th century.

This short period is called by the revisionists, "The Flowering of Islam". Very few of the protagonists of this so-called "flowering" were actually Islamic.

If you read any eco-left website you will see that these people absolutely crave the annihilation of the human race, and especially of the West. They have all followed the neo-Malthusian doomsayer John Ehrlich in asserting that it is not population per se that is killing the planet but population weighted by income, so that what becomes necessary in their fevered imaginations it the annihilation of the wealthier nations.

This green religion is the religion of pretty much the entire left. They have rejected Christianity and Judaism and their drive to embrace some religion leads them to apocalyptic environmentalism because it sits comfortably with their anti-capitalism (which also sees wealth as evil, and hence needing to be confiscated for one's own supposedly more moral uses).

Islam promises to destroy the wealthy west. At the same time its followers all over the world are perpetually impoverished, which appears to the green left as good, so they are sympathetic, in contrast to the bitter hatred they harbor for Christianity, with its love of liberty and for the capitalist economic system that Christian Liberty creates.

The Museum is run by leftists, which means they are virtually guaranteed to be green religionists. They would gladly promote Islam themselves on account of its anti-western goodness, and they would gladly let a Muslim write their display about Europe's history of mostly successful resistance to Islamic conquest. Would be interesting to know which happened here.

It was like that in early 2001 when I visited the British Museum. I can vividly remember the exhibit assuming the truth of Islam, a courtesy that would not be extended to any other religion.

Thanks for sharing!
Truth About Islam

Islam, one among largest religions in the world also the one that is misunderstood all time. There are several sources including political, economic & media, framed Islam as misleading religion. And the truth about muslims are always hidden from the light.