Who gets to be a Founding Father? 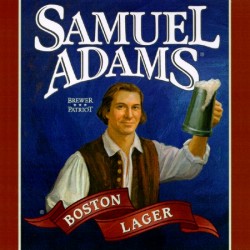 One question that has always interested me is the way historians and the popular culture decide who qualifies as a Founding Father, or to use the more politically correct term, American Founder. The pantheon of the "greats" is pretty well established: Washington, followed in most lists (in varying order) by Franklin, Jefferson, Madison, Adams and maybe Hamilton dragging up behind with his fatal stomach wound inflicted by Aaron Burr. Then there's the second tier: John Jay, Patrick Henry, Gouverneur Morris. And then there are some really major figures of the period who for some reason just are lost in public consciousness: the Rev. John Witherspoon, Fisher Ames, Josiah Bartlett, James Wilson, and perhaps most tragically, Samuel Adams, who has been reduced by modern marketing to the level of a beer brand.

In recent years, in an attempt to be more inclusive of the contributions of women to our fair Republic, attempts have been made to cast Abigail Adams as a Founder -- which isn't all that bad an idea, I think. Her letters evidence that she was a delightful if difficult person, and certainly worthy of a spot in the American imagination for her contributions to understanding the American experiment. And Thomas Paine has been getting some of the recognition that he is so richly due. Are there any other neglected figures from the Founding Era who deserve more attention, more consideration as founders? 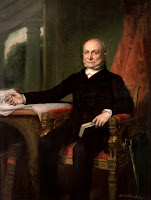 I think so. My thoughts on this point turn to another Adams, one who was just as successful as John, and perhaps more so: John Quincy Adams. President, member of the House of Representatives, abolitionist, diplomat. And it is in the last role that I wonder why he is usually excluded from consideration as a founder. While just a lad during the outbreak of the Revolution, he served as his father's aide in France. He also served as secretary to the American delegation to Russia. In other words, he was in important, if secondary, posts of public duty during the Revolution. He served in the Washington Administration in a diplomatic capacity, and served as Secretary of State under Monroe. So, he was alive during the right time period, he was working on behalf of the revolutionary cause, he had appointments in government after the revolution, and -- critically -- he won election to the presidency. So, why isn't he normally thought of as a Founding Father? 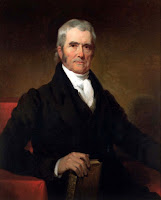 Here's another one for you: John Marshall. Marshall is best known for his tenure as chief justice of the Supreme Court, but he had a career before that. He was an officer in the Continental Army at Valley Forge, and he was a member of the Virginia legislature on several occasions. He was active in the fight to ratify the U.S. Constitution. He was John Adams's Secretary of State. In terms of his significant contribution to American government, his tenure on the Supreme Court and his opinion in Marbury v. Madison rank him second only to George Washington in his impact on the practice of American government. He led the Supreme Court as it settled the vexing question of the authority of the Court in exercising judicial review on questions of constitutional importance. He defended the independence of the Court in the face of attacks from the political prances of government. So, why isn't he normally thought of as a Founding Father?
Posted by Mark D. at 1:06 AM

And ironically, Thomas Jefferson did little else in the Founding than pen most [but not all] of the Declaration. He was MIA in fighting and winning the Revolution, and was abroad when the Constitution was drafted and ratified.

Yet he gets all the ink.

Exactly. Jefferson had virtually nothing to do with either winning Independence or shaping the government of the new Nation via the Constitution. He was part of the drafting committee for the Declaration, and penned some (but not all) of its most memorable language, and that was about it. He was a disaster as Governor of Virginia during the Revolution, and he wasn't a successful president (Louisiana Purchase notwithstanding). Yet how much attention is paid to him? Too much, I would say.