To each his own who eats his own 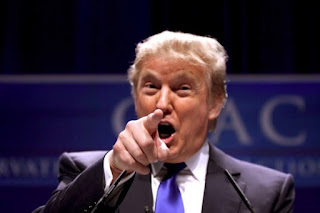 Despite the impressive number of prominent conservatives "Against Trump," as National Review scolds, Donald Trump's first return volley is friendly fire against anti-anti-Trumpist Mark Steyn. In his (over)broadside against National Review, and Steyn, by unhappy circumstance of his former NR employment, Trump cheerfully makes common cause with Al Gore's hockey-stick maker, Michael Mann, who, during the warming pause, paused his science practice to try his stick by motion practice in the D.C. courts, with a penurious Steyn as the hoped-for outcome. Steyn sets it up:


In 2013 I bust up with National Review, for various reasons, some of which I'm not at liberty to disclose but all of which fall broadly under the banner of free speech. I'm very big on that. It's my core issue. So in the dispute between National Review and me I'm cheering for me. Go, Steyn!

National Review has been opposed to Donald Trump since he entered the Republican race. I wasn't, because aside from jollying things up tremendously I think Trump performed a very useful service in utterly destroying then frontrunner Jeb Bush's presumed nomination. I regard the attempt by a third Bush in a quarter-century to occupy the White House as obnoxiously un-republican, with a small "r". So in Trump vs Bush, I 'm cheering for Trump.

Which means that in National Review vs Trump, I'm cheering for Trump. I thought their anti-Trump issue was a strategic disaster that did more damage to them than to its intended target . . . .

. . . . National Review would survive losing the Mann suit. But I wouldn't. I'd be over, in every sense. Yet, in Mann vs Steyn, Trump is apparently cheering for Mann.

I'm not a particular fan of National Review-conservatism's unofficial catchphrase about standing athwart yelling stop. There's no formal objection: conserving certain things is synonymous with stopping other things. But after a half-century of failing to stop most everything it tries, conservatism literally isn't conservative anymore, lest you mean to stick up for the new status quo in bloated federal bureaucracy and a college professoriat who sees no daylight between Jon Chait and Donald Trump, P.C. apostates both. And whether that means conservatism means being more activist, more positive, more subversive, is anyone's guess, but surely it means publishing entire magazines standing athwart yelling "against" is not likely to improve the success rate. Steyn's advice is better: if you don't like Trump, steal his issue.

Still and all, it ought to be awful hard for even Steyn not to sympathize with Trump's critics: that even if you like all the tough talk about a U.S. border fence hecho en Mexico, even if you think Republicans need to rise above principle, for Trump nothing rises above the man himself. And if we elect pure id, it will prove too much for us. The anecdotal proof is Steyn himself, whose biting and incisive pieces over the past months have done as much as anyone to explain the salient dissatisfaction with modern conservatism, and hence Trump's appeal and his long-awaited subversion of the media and our banal politics. And yet, still, and although, Steyn finds himself crosswise with Trump.

The frog and the scorpion come to life.
Posted by Tim Kowal at 9:01 PM

Get professional trading signals sent to your mobile phone daily.

Start following our trades NOW & gain up to 270% per day.