The king decrees; he babbles not 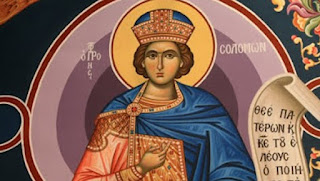 Responding to my earlier post, Tom worries that inviting the legislature or executive branches to challenge court decisions is stepping out on the radical's slope:


[C]onservatives prefer not to destroy the social order to get their way. Gay marriage is now a fact, if only because reversing Obergefell would result in attempting to nullify 1000s of gay unions. So too, it's impossible to strip citizenship from 150 years worth of "birthright citizens," nor is it prudent to have the issue see-saw forever depending on which party controls the legislative process.

The conservative, who loves his country, hates and fears instability and anarchy more than bad laws. The leftist, of course, would rather cut the baby [or the country] in half, like in the old Bible story.

True, but it is no less radical to topple the coordination of the three branches to install the Court above them all. The conservative gives each branch an independent duty to interpret the Constitution, but incomplete power to carry it into effect. Which is why it is a superficial humility -- and dangerous -- when the executive and legislature excessively "defer" to the Court. In belittling their duty to interpret the Constitution they boast of their Washingtonian virtue in demurring to power. Do not believe it! Their effect is to unite their powers and so to enlarge the federal government. Their legacy is a Congress who scoffs at the suggestion of limits to its power; regards knowing those limits as above its paygrade; yet dares the Court to challenge it. This pits power against reason where reason wants a dialogue. And it deprives the Constitution of a point: for what point is there in electing leaders to interpret it when they defer totally to the unelected? And what point is there is amending the Constitution when Court decisions are deemed just as final and unchallengeable as anything in that fusty old parchment?

And if prudence be your touchstone, run -- run far, far away from a doctrine that lets the Court settle the greatest policy decisions for 320 million people for all time. Letting the Court settle abortion "rights" and put it out of touch of the people's representatives is what gives us most and most ghastly abortions in the developed world.

Prudence favors legislating citizenship for those already born here and appropriate new rules going forward. If the Court decides it has already settled the issue, let it say so. If its reasoning is sound, the legislature and executive can follow it. If not, it can carry on the dialogue. Why else does the Court fill pages giving purported reasons for its decisions? The king decrees; he babbles not. By honoring its tradition of giving reasons, the Court, even if unwittingly, participates still in a conversation among equals, its coordinate institutions who, alas, have fallen asleep or mute. Awake, and speak!

Perhaps those more sporting would propose to bulwark the conservative cause by swelling the Court's power and praying it votes conservative. If we elect a conservative Republican president who bats better than average on appointments -- no Kennedys, no Souters, no O'Connors -- it'll indeed be the jackpot: upwards of four appointments! Seven conservative justices! Ready the cert petitions of war! Oh, but what are the chances, really, of a genuine rock-ribbed-conservative bench? Breyer'll probably hold on till the next president, and at least one of the appointments will be a lemon. And conservatives just don't wage lawfare like the radicals do. Best we'll do is hold the line a while.

And if the presidency is lost? Fin. And besides, how conservative is it, really, to play the winner-take-all game on all our righlts-talk issues -- and let's face it, every issue boils down to some "right" or other -- by leaving it up to the Court to settle for all time? There is no reason -- certainly none in the Constitution -- that we should live under the absolute rule of the Court about whose decisions our elected branches have nothing to say.
Posted by Tim Kowal at 1:10 AM

FTR, I'm not saying conservatives shouldn't fight the current tyranny. I'm saying that the left has no compunctions about using "any means necessary" against what it opposes.

And once they hold power, they have no compunctions about ignoring or outright disobeying "the law of the land"--think "sanctuary cities."

The right is at a structural disadvantage, is all, in that Burkean way, 'Don't ever take a fence down until you know why it was put up.' The left simply says, 'Because it's in my way.'