His birthname was Freddie Dalton Thompson. You could look it up. 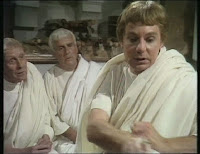 Thenewswalk.com hath awarded Fred née Freddie our news ticker over in the right column because he's been the X-factor, the most interesting proposition.

But Fred's been blowing it bigtime because he's boring, and is a mouse click or two away from getting replaced by somebody worthier. [Nominations are now being taken from the floor.]

Even as an actor, His Fredness was even more boring on Law & Order than Ronald Reagan was in Bedtime for Bonzo, and at least Reagan was the star. And so far, although he's a creditable thinker in his writings here and there, Fred's about 1/100th of the politician that the Great Communicator was, and that ain't gonna cut it.


Ex-Sen. Fred has always got by on his avuncular charm. (I never quite knew what "avuncular" meant precisely until I looked it up just now---it means uncle-like, "especially in benevolence or tolerance," and ain't that Uncle Fred to a T?) But he just got handed the biggest gift of his political career.

For some odd reason, The National Right to Life Committee has just handed Federalist Fred (status quo ante Roe v. Wade, or in other words, "one by one, each to their own, let the states decide") its endorsement.

As a non-absolutist on the issue---at least on the political level---I myself am OK with Fred, although I don't see how his position differs much from Rudy Giuliani's.

Fred has a golden chance---his only real Golden Chance here. Mostly it looks like he's positioned himself to pick up the pieces if and when the all the other leading candidates get trashed by their skeletons, and rest assured, they have them. (The press so far is keeping their powder dry for the eventual GOP nominee. Even the MSM have standards---no sliming unless the Republican has an actual chance of getting elected.)


If Fred actually wants to show some leadership, he could do it right now, on the late-term abortion issue, even if only rhetorically. Most Americans are appalled at abortions---except to save the mother's life---at the point after the baby could live with all the resources of modern science supporting him. Her.

We're not much or many, just a little sliver of the American electorate I suppose, but we feel deeply about this, and love our country a little or even a lot less when it doesn't look out for him.

Of such acorns presidents are elected. Word up, Uncle Fred---speak out. The eagle just dropped the cub into your grasp, and the auspices are good---you could look it up. Lead, follow, or go hide behind the curtains in case we need you. On a scale from one to ten, this is a ten.
Posted by Tom Van Dyke at 10:20 PM

Fred maybe, sorta, possibly lost me in his appearance on Meet the Press with Tim Russert. His continual report that he didn't want to put young girls in jail for abortions went over badly with me. Why? Cuz nobody suggested that, Frederick!!!

Agreed, HB. Fred be blowin' it.

Setting himself up as the fallback position, methinks. But that's John McCain, who's earned it.

The republic could do worse, and has.

Fred's toast. And he was a weird choice for conservatives to rally around in the first place. Ex-Senator, ex-prosecutor, actor. Whatever.

I saw McCain speak at a private function the other day, and even where he's dead wrong (immigration, campaign finance), he's sincere and forthright. If he could come up with some kind of a compromise position on those two issues--find some amount of common ground with his base--I think he'd win the primary in a walk, and the general election in a squeaker.