Everybody's learned from crime dramas that any prosecutor worth his salt can get a grand jury to indict a ham sandwich.

And if that ham sandwich happens to be a Republican in an unsympathetic city like Washington, DC, a conviction is just the mustard on a piece of cake. So it was with the hapless I. Lewis Libby, Jr., #2 man to Lil' Bush's #2 man Dick Cheney. Poor Scooter might as well had "Hormel" tattooed on his forehead.

I dunno if he lied, but it seems he was guilty of fudging, anyway. But lying was the charge he was convicted of, because if fudging were illegal, every damn single one of us would be in jail. It turns out that the real culprit was 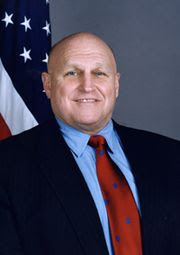 Colin Powell's own #2 man, who doesn't have Hormel on his forehead---in fact I think there's a U in a circle there---Dick Armitage. Armitage is downright kosher, because everybody loves Colin Powell, and so he remains a free man, and unindicted as well.

Because there's no such thing as a kosher ham sandwich.


But there's the problem of the rightosphere, especially the National Review, calling on President Bush to pardon poor scapepig Scooter. Now, I agree that this whole thing was a travesty and Christopher Hitchens has a good roundup of this panoply of slime and punishment here. Hitchens, whom I admire, also calls for a pardon, but like the Founders, I must defer to an even wiser man:

It must be noted also that as governor of Texas, Bush's record shows that he denied clemency to condemned criminals if the proper procedures had been followed, and pardoned himself from considerations of mercy or even justice, relying instead upon the rule of law. The rule of law, the same drumbeat heard throughout the Clinton impeachment debacle, we must add.

So must it be with I. Lewis "Scooter" Libby. He must go to jail. Now, as the court has ordered (altho Libby's motion for freedom pending his appeal seems quite justifiable). So sayeth Montesqieu, so sez me.

I'm OK if President Dubya wants to clear the decks at the close of his administration for the sake of his successor's: there's precedent for pardoning whatever miscreants made bad calls in pursuit of their duty as they saw it. Dubya himself was purposeful in wiping the Clinton slate clean and that was a good thing.

But for now, no pardon for Scooter. He got a raw deal, true, but as GOPers are fond of quoting JFK, life isn't always fair. Or even kosher, he might have added.

Rarely indeed do I find myself in such stark disagreement with my estimable colleague. This is what pardons are for, to rescue an event of profound import from the throes of blind technicality.

Isn't Montesquieu concerned about the executive taking matters into its own hands to unjustly punish and persecute citizens? Who is the victim of injustice if Libby is pardoned?

Isn't the pardon a different sort of action, indeed a re-action? Under your reasoning, when would it ever be appropriate?

And, a tongue-in-cheek question, which Founders do we listen to, the ones who read Montesquieu or the ones who wrote the pardon power into the actual words of the Constitution?

I view the executive pardon power as a function of mercy, not justice. The two should not be confused, or commingled. I don't want the judicial branch to arrogate the dispensation of mercy, either, and we ran into that problem with lenient judges.

Your literal reading of Montesquieu is of course correct; however, the larger point is that when the executive branch becomes the sole arbiter of its own conduct, there is tyranny.

Let's add that accepting a pardon implies an admission of guilt in the first place, which leaves Libby's current appeal of his conviction in Never Never Land. If we let him off at this point, the "rule of law" would of course be the victim of injustice.

I cannot imagine worse events needing rescue from the throes of blind technicality than those the innocence project works on, and even they have to go through re-trails. I'm going to have to fully agree with TVD on this much. The rule of law and the process with which it is administered is absolute. Pardons are not a part of that process for a very good reason.

Disclaimer: I thought the trial was like the Michael Jackson trial for political junkies, and I need more! BDS has rarely felt better. Any leaking done before Novak's column was actually published is fair game, or ought to be. Mr. Rove deserves some extra scrutiny, what with missing emails during the relevant time period and all.

The rule of law does not mean that the results of any given court decision must stand. Separation of powers has always been accompanied by our favorite civics class phrase, checks and balances.

The rule of law has several different descriptions depending on the scholar, but it generally means that in a good legal system the rules are 1) prospective rather than retroactive, 2) not impossible to comply with, 3) promulgated, 4) relatively clear, 5) relatively consistent with each other, 6) stable enough to allow citizens to plan by them, 7) allow for some system of equity, and 8) apply to those who make the rules as well as the everyday Joe.

TVD's complaint may be a valid one, but it's a complaint against the Founders. They didn't specify that the power was to be used for mercy and not for justice (though I doubt the distinction between the two is terribly clear). In Federalist 74 Alexander Hamilton writes:

"Humanity and good policy conspire to dictate, that the benign prerogative of pardoning should be as little as possible fettered or embarrassed. The criminal code of every country partakes so much of necessary severity, that without an easy access to exceptions in favor of unfortunate guilt, justice would wear a countenance too sanguinary and cruel. As the sense of responsibility is always strongest, in proportion as it is undivided, it may be inferred that a single man would be most ready to attend to the force of those motives which might plead for a mitigation of the rigor of the law, and least apt to yield to considerations which were calculated to shelter a fit object of its vengeance."

The rule about the president's power to pardon is clear, well-known, stable, allows for equity, etc. etc. It may be that the executive should not get involved in mitigating the justice meted out (or not) by the judicial system, but the Constitution doesn't say or imply this (quite the contrary if we take Hamilton's word for it).

I admire Devang's devotion to the absolute nature of the "process" and the rule of law, but in our system the same document that created the court's authority to rule on Mr. Libby also created the process of the pardon.

One can stand outside the system and make a substantive claim that the Founders were mistaken to give the president this "check" against the other branches (something I take TVD to be doing), but I don't see how one can complain about the rule of law and the process when both the verdict and the (hypothetical) pardon are created by the same source. You saw off the branch you're sitting on.

the Founders were mistaken to give the president this "check" against the other branches (something I take TVD to be doing)...

Not atall, atall, my dear Dr. Watson. I love pardons. I adore mercy. Federalist 74 is itself an apology for wisdom and mercy.

Montesquieu was invoked because he's generally credited with influencing the Founders into creating a 3-headed government. I want mercy to be solely the province of the executive, not the flabby legislature nor the soft-headed judiciary.

The wisdom of the philosopher-king, and the only one we ever appointed, Gerald Ford, as a result of a grave national crisis: In the extraordinary case of Richard Nixon, a pardon was granted without an admission of guilt.

Good for the country, even necessary, but bad for law. But Libby's is not an extraordinary case, and so I respect our lefty friends' emphasis on "procedure."

Scooter's case is not final enough for wisdom or mercy to intervene: His appeal is pending, he has not confessed guilt, he hasn't served a day in jail. Neither should the executive branch be in a position to sin and absolve itself (semi-) simultaneously.

I hope the court hearing Libby's appeal for freedom on bail pending his apppeal is granted: Judge Walton has behaved dishonorably (with animus, as Hitchens points out), and appeals courts have been known to slap lower judges down.

So, too, per the case itself, it might be that Patrick Fitzgerald's exercise of the independent counsel law (one that has always been of tenuous constitutionality) was improper and grounds for reversal on appeal.

The republic will not rise or fall or even be inconvenienced if Scooter Libby gets drug thru the wringer a little bit. (Mr. Devang's citation of the Innocence Project provides a little goose/gander have/havenot perspective here. Judge Walton had a point about Bork and Dershowitz standing up for a high-profile type, altho not a legally defensible one.)

Let's let it play out a bit. The rule of law, and all that.

Not only should Libby be pardoned, but it would be sweet justice if Fitzgerald was Nifonged! The man new who the "leaker" was before the trial ever began and he knew no crime was committed. Yet with absolute zeal and absolutely no accountability he proceeded to find something, someone, anything, anyone to convict of something or anything. It makes me sick to even think about it.

Dorthy Rabinowitz had a wonderful piece in the Journal on Friday about "A Tale of Two Prosecutors." It is worth reading. I'm with Mr. Hominick on this one. And TVD, although your commitment to the rule of law is admirable, in this your commitment to the purity of the principal seems more like legalism to me.

What's wrong with legalism when it comes to law? You say it like it's a bad thing.

But I'd like to see Fitz and Armitage get what's coming to them, too.

Nice to see some disagreement around here. I'd hate for us to be an echo chamber. ;-)

In this case it is! That's why I used the word legalistic, for its pejorative connotation. Nothing in this life is pure and perfect, and just because there are exceptions to rules doesn't mean the rules are degraded, as you imply. Law after all is a human instrument to order society, and as such is not always perfectly applied. In my mind the sin of Fitzgerald is far greater than what Libby may have done.

You can't pardon yourself - be it for mercy or justice - period. That's not legalism, that's the first evolutionary level above banana republic. (Ford's pardon was legit because of his distance from Nixon. Beyond that, I see no other reason to think that it was "bad for law".)

Libby's day in court is not yet done - and it is by no means certain that Fitzgerald won't receive some form of come uppance. In the meantime, "fudging" to a D.A. just got a lot dicier (which is a good thing).

Pardoning Libby, especially now, is to turn Judge Walton's pathetic statement regarding the "impressive show of public service" by outsiders into a prescient one. Eminent legal scholars have no duty to involve themselves in every case in the land; intervening exectives will have a harder time dodging that responsibility.