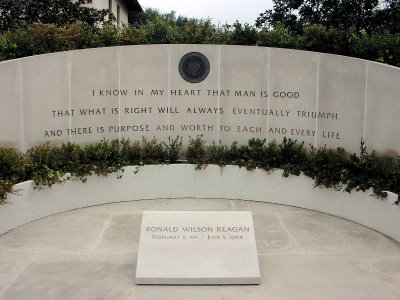 Yeah, I cried when I visited Reagan's Tomb. With my dad, about this time last year. I cried right now pulling up this image of it, to tell you the truth.

I've thought for some time now that neo-conservatism (to which I've subscribed) will be buried in Iraq, not in an unmarked grave, but with flashing neon signs. Bush and the Vulcans completely missed that Iraq would throw its first chance in generations for peace, freedom and dignity into the mud. Into its own blood.

Conservatism prides itself on figuring the depravities of human nature into its human equation, and Bush, et al. (including me), seem to have got caught dreaming that there is a universal human nature that is pulled towards the right and the good. But Ronald Reagan's decidedly unconservative epitaph still haunts me. The "surge" is probably the last attempt to secure a successful outcome for the Iraqi people, and if we are genuinely interested in doing the right thing and pursuing a just peace, we must try this.

I, like most Americans and I think our troops as well, am skeptical that it'll work, and admit to a despair in the Iraqi people themselves, or to be more circumspect, the Iraqi culture. Very soon, the only reasonable alternative will indeed be to step back, "redeploy" if you're fond of euphemisms, and let them butcher each other to their little hearts' content.

I can take being wrong, and certainly George W. Bush. But please, God, not Ronald Reagan. Let this work.
Posted by Tom Van Dyke at 10:14 PM

I do not "mean to be critical just to be critical" but I'm not sure that the first line of the memorial is truly conservative: "I know in my heart that man is good." The separation of powers enshrined in our Constitution and many other conservative beliefs about law enforcement and military force (trust, but verify) tend toward the "man is untrustworthy" perspective. Now, I'm phrasing that differently from a Biblical (Christian) perspective that man is evil unless born again, but that's because you can certainly be a political conservative without any belief whatsoever in the Christ of the Bible.
Now, getting back to the memorial quotation, I expect that is from a speech by Reagan. He was always an "optimistic conservative" so I'm not surprised by the choice of quote. It fits his general outlook.

The "surge" is probably the last attempt to secure a successful outcome for the Iraqi people, and if we are genuinely interested in doing the right thing and pursuing a just peace, we must try this.

To be blunt, this escalation is no such thing. The "surge" is pure "cover your ass" politics, a cynical act of buck-passing designed to let the Bush Administration insist that it gave its boondoggle in Iraq one last college try.

General David Petraeus, the new commander in Iraq and co-author of the Army's counter-insurgency manual, calculated that he needs a minimum of 120,000 combat-dedicated troops to clear, hold, and secure Baghdad. Of the troops in Iraq, 70,000 are in combat-dedicated roles. Even if Petraues abandoned the whole of Iraq to start with Baghdad, he would be 30,000, combat-trained soldiers short (in addition to counter-insurgency requiring a massive cultural shift within the military). This will require tens of thousands of Iraqi troops trained up to the same standards as U.S. combat personnel, none of which are.

That's assuming the 21,000 troops added under the President's meaningless "change in tactics" are all solely combat-trained and dedicated. Even then, the force economy measures to provide that many troops will require pulling them from Afghanistan, extending the tours of exhausted units with broken equipment already in-country, and accelerating the deployment of units state-side (2/3 of which, according to the Army itself, are not fit for combat duty).

This "last, best hope" is nothing of the sort. It is face-saving, "withdrawal with honor" nonsense at its worst. At the risk of not being taken seriously, it is reminiscent of Vietnam. This new policy ensures failure and more deaths; the only thing it succeeds is in placing the butcher's bill on some other president's desk.

According to Irving Kristol, the founding principle of the original neoconservatives was pragmatism, a disillusionment with the simplistic liberalism of the War on Poverty era and a rejection of the equally simplistic free-marketeer conservatives. They wanted, more than anything, a fact-based, rational policy in all both domestic and foreign affairs; pragmatism over ideological thinking. The greatest irony, perhaps, is that their successors are little more than faith-based Wilsonian jingoists.

I used to believe, as you do, Tom, that the U.S. owed it to the Iraqis to stay and do all that it could to stabilize that country and fix the damage it caused. No matter one's feelings about the rightness of the war, I thought, the fact is that we're there, and we have a moral duty to sacrifice and make up for our hubris. I was wrong. We're doing too little too late. The unprofessional, politically driven, and messianic Bush Administration has made the costs of "succeeding" so great that the moral good is outweighed by the evil of its cost.

There is no good or acceptable outcome available to us. An original neoconservative would look at the costs and benefits and find the former far outweighing the latter. Even a modern neoconservative should find the cost in lives, blood, and suffering far beyond what any moral person should be willing to see borne by others.

To further demonstrate how deeply unserious and quite possibly mad our president is at this point in time, I give you his own words:

Succeeding in Iraq also requires defending its territorial integrity and stabilizing the region in the face of extremist challenge. This begins with addressing Iran and Syria. These two regimes are allowing terrorists and insurgents to use their territory to move in and out of Iraq. Iran is providing material support for attacks on American troops. We will disrupt the attacks on our forces. We will interrupt the flow of support from Iran and Syria. And we will seek out and destroy the networks providing advanced weaponry and training to our enemies in Iraq.

This reads as little more than plans for igniting the Shia-Sunni civil war into a region-wide conflict with 150,000 American soldiers in the middle. Without a truly significant allied contribution (let's not forget that the UK is bugging out at the end of Blair's tenure, which is very soon), any attempt to address conflicts with Iran - or even more nonsensically Syria - with military might is not just doomed to fail - it is catergorically insane.

The president's not-so-veiled reference to "restrictions" is a pandering to the "warnography" addicts among his base - time to let the troops off-leash and shoot to kill indiscriminately: A complete violation of counter-insurgency doctrine. Who, exactly, will we shoot? Sadrists, who prop up the Maliki government? Badrists, who oppose Maliki but make up a huge Shi'a base? The Sunnis (who will invariably include resurgent Baathists) in order to support our "war" on Iran (thus bringing us to side with Syria)?

Unconscionable. The president should be scourged and vilified by history and excoriated by the press. As should anyone enabling the bloody sacrifice of American servicemen and women on the altar of the President's arrogance.

I agree that the President's last words -- the first line, at least -- are profoundly anti-conservative and are questionable in the light of Christian theology, which I think gives the best account of man going.

Bug doggone it, the guy didn't govern like he thought man was inherently good. He governed on the theory that incentives work, not natural goodness.

Hunter, you're right about the way Reagan governed but I expect everyone here buys in to the principle that ideas have consequences. The idea that man is naturally good has crappy consequences.

I respect JFE, but I believe he got ahead of himself and history. He says "The president should be scourged and vilified by history and excoriated by the press. As should anyone enabling the bloody sacrifice of American servicemen and women on the altar of the President's arrogance."
JFE, the president should certainly be so-treated, IF your prognostications are correct. Now, I've actually been urging since mid-summer that we leave.

We have accomplished our fundamental war aims (Iraq is no longer a threat to its neighbors and the regional oil supply). Also, we've bought enough time for an Iraqi government to stand up, and so it has. If you're Shia or a Kurd, life is better today than in 2003 and you have hope for the future. Certainly the Sunni Arabs have a big problem, but they have been bleeding for years and making no headway, despite the contributions and participation of non-Iraqis.

All this talk about a civil war is just that. The Sunni and Shia have been skirmishing since their initial split, approx. 1,200 years ago, but there is a large difference between today's level of violence and a "civil war." The Sunni and Shia have also co-existed in many countries throughout the region without any violence beyond petty harassment. We need to pay attention to the immediate context to see if this situation will differ from the norm.

So let's back up a second and look at the fundamentals. (1) Cooperation is necessary to obtain oil revenue. This will unite the Kurds with the Shia (pipeline through Basra so the Turks can't knock out the Kurds via the Mosul pipeline). (2) The Sunni have no united militia or political effort. These have been destroyed (all they can do now is IEDs and platoon-level action), and will take years (if ever) to replicate. (3) The Iraqi government will be anchored by continued air and artillery support from the Americans, likely out of Al Asad and Balad. Even if (under a Democratic Presidency) we totally vacate the country, we can strike from Kuwait and carriers in the Gulf.
In sum, the Kurd/Shia alliance will have the money, the demographics, the unity, and big U.S. guns backing them up.
Will there be political violence in Iraq? Sure. But nothing on the scale you're assuming.

So much for MY prognostications. You may recall that I served in Iraq in 2004, minored in Arabic at UVA, and took most middle eastern history classes in the syllabus. I mention this so you know for me this is not about Bush. My opinion is not a reaction to current events, but rather the result of both education and first-hand experience.

Overall, we will see how "history" will view this episode, but let's hold off on the vilification until history is actually...history.

I think there's no doubt we overestimated the desire of the Arab street for good old fashioned democracy and western liberalism. We shouldn't be surprised, though, not when you think hard about it. Secular modernity works with Christianity because it is truly a child of the Christian faith. It's an unruly and disrespectful child, but the lineage is strikingly clear. The underlying values are the same.

Islam don't work that way. Islam was born as a militaristic and political community at the very same time it was born as a religion. The two things just don't separate and the Arab people seem to prefer it that way. They aren't impressed by our attempts to liberate them. Not en masse, anyway. Not enough to make this work without anything short of backbreaking labor.