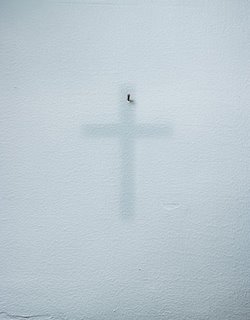 Interesting article from Gary Wolf in an unlikely source (Wired Magazine?) about ‘The New Atheists’, a group of non-believers seeking to inspire (evangelize just doesn’t seem appropriate) atheists everywhere to ‘come out of the closet’. The idea here being that: 1) there must be a great mass of people out there who call themselves agnostics when they are really atheists; 2) these people need to be mobilized in order to put down the destructive force of religion. Wolf, who identifies himself as part of their target market, takes the reader along for the ride on his own personal journey to discover whether he should respond to their call.

Wolf’s conversion adventure is centered around his interviews with three of the movement’s leading members - evolutionary biologist Richard Dawkins, neuroscientist Sam Harris, and philosopher Daniel Dennett. Each man world-renowned in his field; each with his own special point of emphasis in the reason and need for an un-revival. Yet, despite his favorable disposition towards their non-theistic foundations (along with an understanding of Christian apologetics so pathetic that it could only have come from its opponents), the call does not resonate with Wolf.

“When prophets [i.e. the New Atheists] provoke real trouble, bring confusion to society by sowing reverberant doubts, spark an active, opposing consensus everywhere – that is the sign they've hit a nerve. But what happens when they don't hit a nerve? There are plenty of would-be prophets in the world, vainly peddling their provocative claims. Most of them just end up lecturing to undergraduates, or leading little Christian sects, or getting into Wikipedia edit wars, or boring their friends. An unsuccessful prophet is not a martyr, but a sort of clown.

“Where does this leave us, we who have been called upon to join this uncompromising war against faith? What shall we do, we potential enlistees? Myself, I've decided to refuse the call. The irony of the New Atheism – this prophetic attack on prophecy, this extremism in opposition to extremism – is too much for me.”

But why does he arrive at this conclusion? Despite the gaping holes he pokes in the arguments of Dawkins, Harris and Dennett (one wonders if there might there be more:), it's not as if Wolf is about to lose his faith in the non-existence of God (…if we continue to have respectful conversations even about things we find ridiculous…).

But perhaps I should stay quiet, maybe even relieved or grateful for his conclusion. Perhaps he is serious about his agnosticism, and is genuinely open to the possibility that God exists.

Or perhaps he has discovered that it is just easier to shut down the investigation there and remain in a position that is extremist in its own right - one that requires no defense and nothing of you. He can have it; sounds a little too much for me.
Posted by Matt Huisman at 12:07 AM

Seems Wolf is atheistic about his atheism.

I can respect that.

There’s a lot a lot to like about Mr. Wolf. But he strikes me as the kind of guy who finds himself at the other end of the argument, no matter what room he enters. Contrarians are a fun bunch to be around, but you’ve got to be careful which kind you’re dealing with when the expect you to listen to them. The Chris Hitchens’ of the world are fine – they hold actual positions. But there are those who’ll shoot arrows in every direction without ever exposing anything to a direct hit.

This is what agnostics do. Their grand claim is that they remain open to the possibility that they may be wrong – that there might be a God. Big deal. All of us should be open to the possibility of being wrong. For me, the only respectable agnostic position is to remain skeptical about God, but defer to religious cultural norms because of the lack of a better alternative. To do otherwise is to be an atheist (which I can respect) and requires you to offer up an alternative to scrutiny.

Take, for example, Dan Dennett. Once you get past him mockingly (elsewhere, not in this article) stating that there is no God, no absolute, you wind up with a gem like this (from the article):

Dennett is an advocate of admitting that we simply don't have good reasons for some of the things we believe. Although we must guard our defaults, we still have to admit that they may be somewhat arbitrary. "How else do we protect ourselves?" he asks…

"Yes, there could be a rational religion," Dennett says. "We could have a rational policy not even to think about certain things." He understands that this would create constant tension between prohibition and curiosity. But the borders of our sacred beliefs could be well guarded simply by acknowledging that it is pragmatic to refuse to change them.

Perhaps I should cut him some slack; atheism doesn’t have a couple thousand years of scrutiny to fall back on.

I’m not saying that everyone needs to be a radical evangelist for their point of view, only that they attempt to understand the logical outworkings of it – no doubt a humbling experience for all. Agnosticism seeks to avoid the pain of such inquiry, and is therefore little more than a delusion in my book.

I think it's incredibly easy to be contrarian about Dennett, Dawkins, and Harris.

To speak further, you know how Christians get upset when one of our guys goes over the edge and just starts uselessly offending people? That's how the average non-theist type can come to feel about Dawkins, Dennett, and Harris.

Speaking as one of those agnostic-atheistic sorts, all I can say is that I think Mr. Huisman is wrong to insist that agnostics "defer" to religious tradition; there is much of value to be gleaned from religious tradition without having to care one whit whether there's a God or not.

Before one trawls through the comments of posts-past to dredge up numerous writings to the contrary, please rest assured that you are referring to some other arrogant, pretentious bastard of a man. :) My position has changed somewhat, to more fully embrace the idea of a gentle cynic of doubt who doesn't really care if there is a God or not. I truly believe that whether there is a God or not is one of the most inconsequential questions we can debate about. It is a question whose ultimate answer we cannot know until our time on the material plane (to get all metaphysical about it) is said and done. There are far more important and tangible things to turn one's intellect towards. Am I an atheist to a Judeo-Christian/Muslim? Absolutely. Do I reject the metaphysical entirely? No.

Which is why I agree with Mr. Wolf that the vociferous advocacy of men like Drs. Hawkins and Dennett, and Mr. Harris, are just as irritating and smack as much of fanatacism as any other dogmatist. Their extremism is too extreme.

Mr. Huisman prefers to see agnosticism as a useless delusion, a mechanism to avoid inquiry. I disagree: agnosticism is honesty.

James, the God question need not be decided with absolute certainty, but from a functional standpoint, one will undoubtedly have to choose between a theistic or atheistic “operating” foundation/tradition. For my money, the term functional atheist better describes your position, whereas agnostic might be a better term for those who don’t necessarily believe in God but are willing to defer to the cultural norms of those who do.

Getting back to the God question, I can appreciate your frustration with the endless debates pro and con. But if you’re trying to be logically consistent, I don’t see how you can avoid it. Whether you like it or not, it is a foundational presupposition for all the rest of your thinking. From what I can see, the reason Dawkins, Harris and Dennett upset people (aside from their complete lack of tact) is that they demand that you apply their (literally) godless logic all the way down to the foundational level. Those that do so quickly discover that such a destination does not live up to their expectations.

Enter the “delusional” agnostic, who avoids this entire predicament by merely refusing to engage it. Why bother being logically consistent when you can dismiss something as irrelevant or insignificant?

[BTW...good to hear from you again. I've been gone a while myself (perhaps we're alter egos)...here's to hoping we both stick around for a while.]

It's an issue you can't really get around. Jesus had it right when he asked, "And who do you say that I am?"

Part of what's weird about Dawkins is that he'll proclaim himself a passionate Darwinist in science, which drives him to be a passionate atheist, and then turn around and say he is a passionate anti-Darwinian in politics. Why? Why my friend? Why does it matter? Why choose charity over selfishness?


I think Mr. Huisman was agreeing with the last clause, whether he intended to or not.

George Washington was no orthodox Christian in any verifiable sense: for instance, he never to public knowledge took communion, although he attended church regularly with his wife, who regularly took communion. Obviously, something was going on in his head.

Still, he said in his 1796 Farewell Address:

"Of all the dispositions and habits which lead to political prosperity, religion and morality are indispensable supports. In vain would that man claim the tribute of patriotism, who should labor to subvert these great pillars of human happiness, these firmest props of the duties of men and citizens. The mere politician, equally with the pious man, ought to respect and to cherish them. A volume could not trace all their connections with private and public felicity. Let it simply be asked: Where is the security for property, for reputation, for life, if the sense of religious obligation desert the oaths which are the instruments of investigation in courts of justice ? And let us with caution indulge the supposition that morality can be maintained without religion. Whatever may be conceded to the influence of refined education on minds of peculiar structure, reason and experience both forbid us to expect that national morality can prevail in exclusion of religious principle."

That's what "defer" means in this case, I think.

A killer point there, HB. We are moral because...Darwin says so? Huh?

You really tickle me sometimes, man.