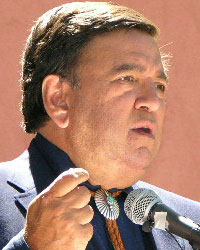 Of all the Democrats in the mix for 2008, I've been best with Bill Richardson. Currently governor of New Mexico, a former congressman, ambassador to the UN, and executive branch experience, too, as Secretary of Energy.

The depth and breadth of his resume, his curriculum vitae, is without equal in the Class of '08 from either party, hands down.

Latino, too, which would be A-OK for this fractured USA. I'd never vote for crappy cake for the sake of diversity, but all things being equal, I could be influenced by the icing or even the cherry on top.

But Richardson let me down bigtime in this interview (and kudos to the Los Angeles Times for asking the unaskable question):

LAT: The can't-be-any-worse argument was also very popular in 1975 in Vietnam, and Cambodians found out that it could actually get quite a good deal worse. Is that something that worries you? What do you build into that process?

Richardson: Yeah. It worries me, but how worse can it get?

Anyone who thinks things can't get any worse has no imagination. Gov./Amb./Sec./Rep. Richardson must know that's so, but has given himself over to the cynicism, despair and hopelessness of our age and its chattering class.

We shall need more from our next president.
Posted by Tom Van Dyke at 10:01 PM

Anyone who thinks things can't get any worse has no imagination.

It's more likely that he's just skillfully dodging the question that no one in his target audience wants him to answer. Who wants to dwell on such nasty details when a "solution" is so close at hand?

Van Dyke has put his finger on it: the idea that present-day Iraq is as bad as it gets is patently counterfeit.