The local news here in Los Angeles had some footage of a "traditional" drum circle accompanying the Debbie Allen company doing an African-style dance in honor of MLK.

That's as silly as trotting out bodhrans and a riverdance to commemorate John F. Kennedy. 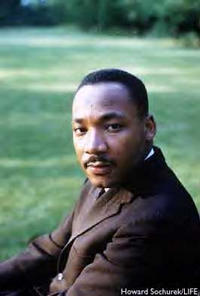 Dr. King, by the strength of his beliefs and character, led our country through a very dangerous time in our history, the days of rage of the 1960s. The whites threw him in jail, and the still-radical Malcolm X's people threw eggs at him, yet he bore the slings and arrows from every side and brought us all through it.

Let's get one thing straight---Martin Luther King, Jr. was an American, and an American hero, pure and simple, and that's why we honor him today. His work is surely not done, but his truth is marching on.
Posted by Tom Van Dyke at 8:06 AM

"Dr. King, by the strength of his beliefs and character, led our country through a very dangerous time in our history, the days of rage of the 1960s.... and brought us all through it."

Sorry, Charlie, but no sale. "Dr." King, he of the stolen doctor of divinity degree, didn't lead or bring our country through anything. If he had at least believed that line about judging people based on character rather than color, I could give him credit for that, but alas, 'twas a rhetorical gambit for his white listeners, and nothing more.