There never has been a need in the United States for a Christian political party because avowedly anti-Christian forces have been historically rare. Instead, we've had a continual alliance between moderate Enlightenment thinkers and Christians who have had similar agendas.

I sometimes wonder whether it is this coalition that is under more strain than the one between conservatives and libertarians that everyone talks about.

I also sometimes wonder whether the United States will ever see the emergence of a Christian Democrat party of the kind we see so frequently in Europe, though the U.S. version would surely be a tad more laissez-faire simply because of the American heritage. Such a party in the U.S. would be pro-life, pro-traditional family (through promotion rather than making alternatives illegal, probably), pro-modest welfare state tied to moral requirements, and soft on immigration. It would come down more or less in the center of American politics economically with a rightward tilt socially. I suspect it would also be typically pro-Israel given the sympathies of the great majority of American Christians.

There are a few fellows working on the Christian Democrat United States version on the web. For an interesting thought experiment as much as anything else, check 'em out at www.cdusa.org.

(This fella off to the right is Abraham Kuyper, former university professor, newspaperman, prime minister of the Netherlands, and probably not a bad mascot for Christian Democracy.) 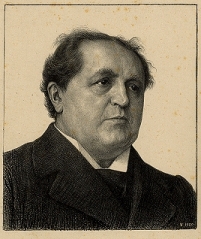 Do the "Christian Democratic" parties of Europe actually talk about faith? I've been lazy and never checked, just assuming that they abandoned the faith decades ago (like so many universities, hospitals, and other institutions founded by Christians in the U.S.). Put another way, is "Christian Democratic" anything more than a label, as practiced in Europe?

Evanston, I'm sure it varies, but my understanding is that Christian Democrats are, in fact, believing Christians who have a different view of politics than you and I do, but who are a countervailing force to socialism and materialism in Europe. They are not as powerful as American parties because of proportional representation. Instead, they are part of coalition governments or serve outside them as critics.

The FDR Democratic Party's backbone was Christian Democrats. As American mainstream Christianity has gone by the boards (or to hell in a handbasket, as it were), so has that backbone.

That we make provision for the poor is quite essential to any essentially Christian politics; that we give ourselves over to rectifying "income inequality" places our concern solely in the material world---if we follow the Enlightenment and elevate the relief of man's estate to the highest of all possible goods, we must needs ignore his soul in the process.

To provide for him is not synonymous with challenging or inspiring him to his best, and there's the rub.

To answer Evanston's question, it depends on the Christian Dem party. Germany's CDU (and its Bavarian counterpart CSU) is pretty much secularized, though the minority of churchgoers vote for them overwhelmingly. Belgium's secularized so much they've dropped the Christian label. The Dutch CDA is much more Christian (their leader gave the Stone Lectures at Princeton Seminary a few years ago).

The thing is that their pre-WWII predecessors were quite Christian (either Catholic or Calvinist) and quite successful. I'm not sure something like this is quite possible in the US, mostly b/c we're a lot more pluralistic than any of those countries and it's very, very hard to get a third party going.

Michael, thank you for the breakout of the various CDUs. They seem rather lukewarm (Laodicean?) to me.
Personally, I do not favor a "christian" political party. Direct organizational overlap between church & state, whether it be Roman Catholic or Church of England, Church of Sweden etc. tends to result in compromise with the Christian portion.
The other "bookend" to my position is that we can and should be good citizens per Romans 13 and 1 Pet 2, as well as follow Paul's example (exercising our rights as citizens). Opting out (for lack of the perfect, rejecting the good) is poor stewardship.

There is a Christian Democratic party in the United States. Please come visit us at http://www.solidarity-party.org/ .