As you might know by now, Donald ("The Donald") Trump, in his role as co-owner (with NBC) of the Miss Universe pageant, found himself obliged to render judgment on Miss USA Tara Conner, a now-21-year-old who partied heartily after her coronation, her hardy partying even including the nasal ingestion of a very popular powder.

If you know what I mean, and you do. There was other stuff, too. In short, she was a very, very bad girl. 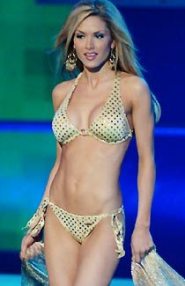 And so, it was put to His Donaldness to decide her fate, whether she should be made to pay for her crimes against propriety (as a talk show host I happened on today thymotically urged) and lose her standing as the representative of all that is good and holy about these here United States, or not.

Perhaps my favorite story in the gospels:

Then the scribes and the Pharisees brought a woman who had been caught in adultery and made her stand in the middle.

They said to him, "Teacher, this woman was caught in the very act of committing adultery.

Now in the law, Moses commanded us to stone such women. So what do you say?"

They said this to test him, so that they could have some charge to bring against him. Jesus bent down and began to write on the ground with his finger.

But when they continued asking him, he straightened up and said to them, "Let the one among you who is without sin be the first to throw a stone at her."

Again he bent down and wrote on the ground.

And in response, they went away one by one, beginning with the elders. So he was left alone with the woman before him.

Then Jesus straightened up and said to her, "Woman, where are they? Has no one condemned you?"

"I‘ve always been a believer in second chances," said Trump. "Tara is going to be given a second chance. She left a small town in Kentucky, and she was telling me that she got caught up in the whirlwind of New York," Trump said at a news conference with Conner at his side. "It‘s a story that has happened many times before to many women and to many men who came to the Big Apple. They wanted their slice of the Big Apple, and they found out it wasn‘t so easy."

Miss Conner will enter rehab, etc., and be put on a very short leash. She wasn't given a pass.

You must have read The Book or heard the story, or perhaps you simply opened your heart to the Right Thing. I don't care. You did very, very, very good, and I'm sure He's proud of you. In your way, you get it.
Posted by Tom Van Dyke at 2:03 AM

Laudable of Trump, and let's all hope that Miss Conner, whom God has graced with extraordinary beauty, makes good use of her reprieve, but...why was this one of the utter-top news items of the decade? Has America forgotten poor lost lambs Paris Hilton, Lindsay Lohan, and Britney Spears so soon?