It is pronounced POAG muh HONE, anglicized as Pogue Mahone, and in Irish Gaelic it means "kiss my ass." Shane MacGowan has been inviting the world to do so for 25 years now, and on Thursday night Washington DC obliged. I was there, I saw it, and I was glad to join in.

Shane MacGowan is the founder and animating spirit of The Pogues, the groundbreaking 80s group that invented the category "Celtic Punk" now inhabited by more derivative acts like Flogging Molly, Dropkick Murphys, and The Tossers. MacGowan shortened the band's name in 1984 to end a daytime airplay ban by the Beeb -- who had not been amused to learn they'd been the laughingstock of their Irish speaking audience every time they announced a Pogue Mahone tune. This might be the last time MacGowan refrained from telling someone to kiss his rear.

MacGowan is one of the best songwriters to come out of the British Isles in the past thirty years. It was his pure genius that married the angry energy of the Sex Pistols with the lyricism of Yeats and the comic irony of Flann O'Brien. But that's not all MacGowan has in common with these legends of Irish art: he is also a prodigious drunk. Not one of these apologetic, woeful, Twelve Step alcoholics, mind you, with their remorse and excuses of self-medication. He's an unrepentant drunk, who acknowledges that his erratic behavior forced his fellow band members to abandon him for a decade, and who therefore dials back the inebriation just enough to stay on stage for two hours, but not enough to fool anyone into thinking he's sober. 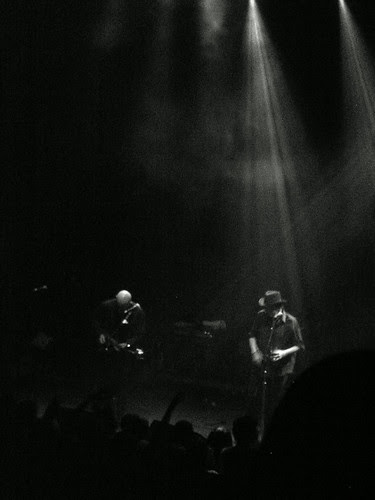 I went into this show with a good bit of foreboding. We'd paid fifty bucks apiece for the tickets, after all, and there was no guarantee there'd still be a lead singer standing by the time the doors opened at 10 pm. Their entrance onto the stage did little to allay my trepidation: MacGowan was already visibly unsteady, and carried a partially consumed quart of whiskey in a left hand death grip. They opened, appropriately enough, with Streams of Whiskey, a song haunted by the ghost of Brendan Behan, another legendary Irish drunk. (Behan looms large in the Pogues oeuvre: they recorded his Auld Triangle early on, and he also appears in Thousands are Sailing.)

Halfway through the second song, If I Should Fall From Grace, I formulated this pointyheaded theory that a live performance by Shane MacGowan in 2006 only made sense as an iconic representation pointing backwards to his earlier recordings. The words were a complete muddle. No one seeing him for the first time could understand how good he had been, and why everyone in this club adored him.

But then I noticed something very strange: as he sang, his head seemed to clear. This seemed physically impossible, since we had watched him consume at least a half-pint of whiskey in the space of fewer than two songs. But it was undeniably happening: he moved more surely about the stage, sang more strongly, and by the time he began Broad Majestic Shannon, I was sure I'd see, and enjoy, a full show. And I did ever.

MacGowan's voice is not what it was twenty years ago, and never will be again. Like his body, it is weighted with the burden of heavy experience. Somehow, this just makes the songs even more his own property. In comparison, the idiotic japery of Mick Jagger is embarrassing and pathetic.

The critics all agree that If I Should Fall From the Grace of God is the Pogues's best album, but I have always preferred Rum, Sodomy, and the Lash, where the Irishness of their instrumentation comes through most clearly, with the addition of uillean pipes and fiddle. The enduring appeal of Celtic Punk is, for me, the Celtic rather than the punk. (Although I admit that Grace of God contains one of the finest songs of the 20th century, Turkish Song of the Damned. Even there, though, the supposed "world beat" influence is true to their Irish roots. It has the anglo-oriental exoticism of Burton or Doughty or Coleridge. In fact, I am informed you can sing The Rime of the Ancient Mariner to the tune of Turkish Song of the Damned, which would have impressed the hell out of my high school English teacher.)

When The Pogues were enjoying their greatest commercial success, I preferred their Stiff Records colleagues: Nick Lowe, Elvis Costello, Ian Dury. I haven't listened to any of them in ages, but I have five Pogues CDs on my iPod. There are rumors that several of the Pogues are writing fresh songs, and a new album may be forthcoming. Here's to success with the rest of the too-short American tour, which included only eight dates in four cities.
Posted by Kathy Hutchins at 1:46 PM

I was going to write a book called How the Irish Saved Civilization, how we chose to stay mostly drunk and not interfere with its merry and tragic course, but the title was already taken.

Had we decided to rule the world, which is easily within our power, the result would have been much better than what is so smugly called "civilization." But the Irish seem to lack that killer instinct that served the English so well and that Americans have perfected.

On the other hand, I've never known what to make of that romantic conception that to be a great artist, one must make a trainwreck of his life. Whether it's a coincidence, a correlation or a cause, I cannot say.

Had we decided to rule the world...

Van Dyke? Irish? No doubt Shane MacGouwan is rolling in the grave that is his body over that one. Bloody Dutchman, already had your run at world domination.

"There are two things in the world I can't stand; people who are intolerant of other people's cultures, and the Dutch." - Michael Caine, Austin Powers in Goldmember.

Thanks, Kath. I downloaded the snippets they offer with the lyrics and they were great.

I just realized something...our office ordered take out from Poag Mahone's in Chicago a few weeks ago. Really good burger. But now that I know about the name, I'm not sure what to make of the place. Poag Mahone and food service may prove to be too hard for me to reconcile.

God invented whisky to keep the Irish from conquering the world.

The Irish are a very fascinating people who sentimentalize their homeland but can only thrive elsewhere.

Love the Pogues. "Lorelei" and "Fairytale of New York" are fantastic.

Shane however has the worst singing voice of all time. Somewhere in outer mongolia a syphilitic goat herd is crooning in a way far superior to Mr. MacGowan.

And Kathy's right, he's rather chaotic. My wife has worked in the music industry. She said that he was by far the most petulant and demanding big name musician to deal with. Constantly demanding that people hook him up with drugs, alcohol, and ladies of the night.