I feel for Andrew Sullivan. Really do. As an unapologetically---on both counts---gay Iraq War hawk, he found himself in bed or at least in a shotgun marriage with President Bush, whose religious-right allies are opposed to the Love That Dare Not Speak Its Name doing any bedding or wedding.

It seems he's been edging back to the fold of late, toward any weltanschauung that doesn't include supporting FOFs (Friends of Falwell). The life of a heretic is a lonely one, and doubly worse when you're thought to be a quisling.

So, ultramegaleftyliberal Matthew Yglasias makes great hay of Mr. Sullivan's confession of a loss of faith in the foundations of the Bush/Iraq enterprise. Turns out another ultramegaleftyliberal got a Freedom of Information Act release of notorious Department of Defense underling Steven Carbone's notes from meetings with Donald Rumsfeld. 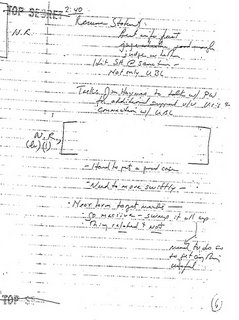 "Go massive ... Sweep it all up. Things related and not." (My italics). My confidence that there was no deliberate misleading of the American people after 9/11 just slipped a notch.

I dunno if Mr. Sullivan actually looked at the document he posted, or just skimmed the FOIA blogger's account of it, but the keen eye reveals the smoking gun, "sweep it all up...relevant and not" is appended with an arrow saying "need to do to get anything useful."

The non-Bush Derangement Syndrome interpretation of that would be, "Dear Lower Level Guy and His Even Lower Staff: We know more than you do, and are in a better position to evaluate the intelligence and connect the dots. Get it all. Love, Rummy."

The section of the documents that reads "judge whether good enough [to] hit S.H. at same time" should come as no surprise to anyone who knew that the Bushies were determined to enforce Congress' 1998 resolution for regime change and reverse years of President Clinton's sometimes malign neglect of Saddam Hussein's violation of his peace treaty that included the withdrawal of WMD inspectors, attacking Baghdad with cruise missile or two, and most importantly, starving out the Iraqi people through "bloodless" sanctions.

No doubt, Dubya and the Bushies fixed the Saddam problem for good. No doubt. 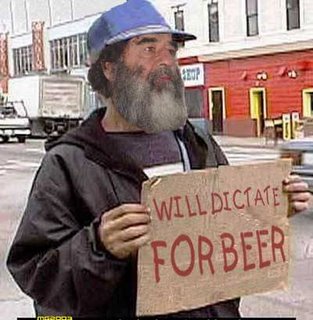 In the aftermath, the Iraqi populace has already turned against al-Qaeda's indiscriminate murder. And we have cleared the road to self-determination. If the Shias and Sunnis want to descend into fratricide yet again, like the Iran-Iraq war, we cannot and should not stop them. Goodbye. But I believe they will step back from civil war. As their latest provocation in blowing up a mosque/shrine proves, it is the al-Qaedaers who are humanity's enemy, crusader and Muslim alike.

There is hope for us all yet, Mr. Sullivan, and your instincts were right in the first place: Saddam was a boil on humanity's butt that needed to be lanced. And we've done our moral duty in protecting the weak from the strong in the vacuum that inevitably ensues when the temporary stability of a butchering dictator evaporates. Nihil desperandum, sir. My admiration for your courage in a difficult spot endures.

So I guess you'll support incompetence and insanity to the end.

I might read what you have to say these days when you quit using labels like "ultraliberal yada, yada".

But as to any substance to Iraq, I've basically concluded that it's definitely getting worse and the Sunnis will continue to be in bed with Al Qaeda and we believe appeasing them by giving them more inclusion in the government will stop their terrorist acts, but all it does is encourage them.

At this point I believe we should partition the country since Iraq was an artificial creation of Britain. The Kurds seem to love us and have lots of oil, so we could establish the military base we want in the new Kurd country and let it be a model democracy and let the Shiias and the Sunnis kill each other because we lack the power to stop them.

Oh BTW, I read that the military just downgraded the one independently capable Iraqi military unit to capable only of fighting with our support

So can we all agree now that the last Iraqi vote meant exactly nothing? I seem to recall a big deal being made of it on this site with the prognostications of an inevitable democratic cornucopia that would spread it's gifts not just to every Iraqi but to all the middle east.

Meanwhile some of us argued it was nothing more than a speed bump on the way to civil war.

Which side was right? Which side should be given more credence in the future?

That's a fair question, but technically you're not allowed to ask it for another 30+ years. At least, that's my understanding of how these things work (see: Affirmative Action).

(Oh, and we get to call you a racist for questioning the program while the temporary trial period is still in effect.)

(for the record though I think AA is pretty messed up and we don't need 30 years to know it. It's a problem of the fundamental principle not working rather than the efficacy of the project)