"All right, listen to me! Listen carefully! This is your goddam life I'm talking about today! In this country, when one company takes over another company, they simply buy up a controlling share of the stock..." 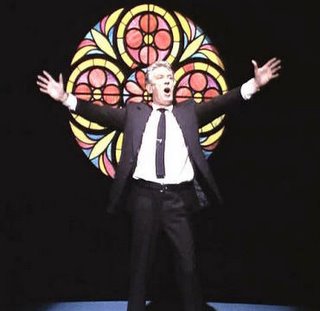 "But first they have to file notice with the government. That's how C.C. and A. -- the Communications Corporation of America -- bought up the company that owns this network. And now somebody's buying up C.C. and A! Some company named Western World Funding Corporation is buying up C.C. and A! They filed their notice this morning! Well, just who the hell is Western World Funding Corporation? It's a consortium of banks and insurance companies who are not buying C.C. and A. for themselves but as agents for somebody else!

We know the Arabs control more than sixteen billion dollars in this country! They own a chunk of Fifth Avenue, twenty downtown pieces of Boston, a part of the port of New Orleans, an industrial park in Salt Lake City. They own big hunks of the Atlanta Hilton, the Arizona Land and Cattle Company, the Security National Bank in California, the Bank of the Commonwealth in Detroit! They control ARAMCO, so that puts them into Exxon, Texaco and Mobil oil! They're all over -- New Jersey, Louisville, St.Louis, Missouri! And that's only what we know about!

There's a hell of a lot more we don't know about because all those Arab petro-dollars are washed through Switzerland and Canada and the biggest banks in this country!

For example, what we don't know about is this C.C.A. deal and all the other C.C.A. deals!

Right now, the Arabs have screwed us out of enough American dollars to come back and, with our own money, buy General Motors, IBM, ITT, AT&T, Dupont, U.S. Steel, and twenty other top American companies. Hell, they already own half of England.

Now, listen to me, goddammit! The Arabs are simply buying us! They're buying all our land, our whole economy, the press, the factories, financial institutions, the government! They're going to own us! A handful of agas, shahs and emirs who despise this country and everything it stands for -- democracy, freedom, the right for me to get up on television and tell you about it -- a couple of dozen medieval fanatics are going to own where you work, where you live, what you read, what you see, your cars, your bowling alleys, your mortgages, your schools, your churches, your libraries, your kids, your whole life!

By midnight tonight I want a million telegrams in the White House! I want them wading knee-deep in telegrams at the White House! Get up! Right now! And send President Ford a telegram saying: I'm mad as hell and I'm not going to take this any more! I don't want the banks selling my country to the Arabs! I want this C.C. and A. deal stopped now!

Well, Western Union doesn't deliver telegrams anymore, the Arab stake in America is a helluva lot more than $16 billion, and Gerald Ford isn't president, but not much else has changed from 1976. Eerie, and pure genius.


Now, the national security dimension of an Arab country running our ports is enough to raise the hackles of common sense in anyone, apparently even in Democrats, so this must be really important.

But the United Arab Emirates, who just bought the stock of a port-running company, has never been proven to have done any harm to the United States, has it? In fact, they handed over one of the USS Cole terrorists. I mean, we're not engaging in racial profiling here, are we? (Just checking. I would not want our friends on the left to employ common sense if it makes them morally uncomfortable.)


There's a little-known law from 1920 called the Jones Act, a portion of which, to ensure the nation's economic security, dictates that any cargo (petroleum products included) shipping port-to-port must be done by American built, owned, flagged and (75%) crewed vessels.

There has been a move of late to repeal the Jones Act, as its protectionism had the effect of a hidden tax, although such efforts have stalled. The Jones Act was designed so that no outside forces could interfere with the flow of commercial shipping in the United States.

Instead of repeal, it appears national security demands an expansion of the act to include our ports themselves. I want the C.C. and A. deal stopped now, too.
Posted by Tom Van Dyke at 7:00 PM

I haven't seen any polls on protectionism. The answers to Individual questions always seem come out on the protectionist side, is the issue as a whole different?


The PBS Commanding Heights documentary was correct.. Protectionism needs to be advertised as a form of socialism, no? :)

I don't know about any of this...my guess is that you could make a case that the longshoremen in Los Angeles represent a bigger threat to national security (and a much larger tax on shipping than the Jones Act could ever dream of) than than any port security company.

Unless you're willing to put the U.A.E on the list of nations that sponsor terror - let them handle the contract, set up the safeguards, and then audit the crap out of them.

Do the Arabs own the media and the banks too?

This reminds me of the anti-Japanese hysteria in the early 1990s and the anti-Semitic hysteria of the 1920s and '30s.

Now, I agree that port security should not be entrusted to a company from the UAE, one of fundamentalist Islam's prime terrorist recruiting grounds. But the hyperbole - especially the blatantly racist Paddy Chayefsky's - is unnecessary to the debate.

It would appear that those of us, such as myself, who were a bit concerned about the purchase of P&O by Dubai Ports World are doing our own little "the boy who cried wolf" bit. DPW has a sterling worldwide reputation, and is run extensively by Americans.

I don't see any problem with the sale. Further, your point about racial profiling is right on the mark.

Exactly right, James. And beyond the integrity of the company itself, there are about 5 billion easier ways to smuggle illegal items into this country. Penetrating port security from the top down has to be one of the most risky and problematic ideas I've ever heard.

As far as the whole foreign control/ownership scare goes, I'm with you there as well. I think all of our economist friends here would agree too. (Even if it were a concern, we have much bigger creditors than the Arabs.)

That said, I still enjoyed Tom's comparison to Network. The writers were quite on the money with their notion that the Arab world was slowly positioning itself to challenge the West. Whether that's racist or not, it looks pretty accurate to me.

Gee, and I thought this was an issue you could add to the list of Bush Acts you disagree with. Guess I was wrong.

Connie, is this a slam dunk case? The easy thing on this one is to throw out the contract - all I'm saying is that it appears worse than it is (though I could be wrong).

Not that it matters anymore. Even if I was right, this is one of those items where the surface difficulties are too much to overcome with a mere explanation. Team Bush flubbed the delivery, and it is not worth the fight.

Some new information on the matter:

It is indeed a scandal, but not in the matter of security.

1) The Committee on Foreign Investment in the United States (led by Treasury Secretary Snow) is, under federal law, supposed to conduct a 45-day investigation into any investment that may involve national security by a foreign state-owned company (such as Dubai Ports World). The president is then supposed to make the final approval or denial of the investment. The 45-day investigation never happened, and Bush says he never heard of the deal until afterwards. If he is telling the truth, then his administration broke federal law. At best, it shirked its legal duties.

2) Treasury Secretary Snow has had prior business dealings with Dubai Ports World.

It would appear that the real scandal is far more mundane but also far more indicative of corruption than any imagined threat of terrorism.

Tom
I'm surprised that you came down so hard against this deal.

To be honest, I can't figure out whether it's a good idea, or a bad idea.

I think we do need to establish strong business relationships with moderate Arab countries, and with moderate Muslim in particular. So, in that sense this seems like a good idea.

The potential problem is too obvious to mention.

The 9/11 Commission cited our ports as one of our most vulnerable spots, particularly for the introduction of a nuke onto the shores of the U.S., I believe.

But, of course, the U.S. is handling security.

I think I'll flip a coin and then go watch a basketball game on TV.