A Tale of Two Huskies

Eric Pfieffer goes where few men dare; he took a stroll down Pennsylvania Ave. Last Thursday to check out the MoveOn rally demanding Karl Rove's head on a pike in Lafayette Park. I suppose most conservatives would be more irritated by the hippie in the Che shirt, (is it Che? On second glance it might be Jimi Hendrix. Well, it's someone annoying, I'm sure) but I think another snapshot tells us more about the character of the bull-goose-loony-left. 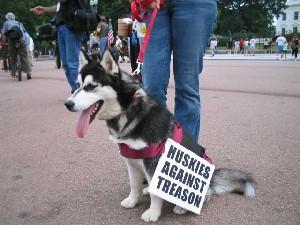 It was 90+ degrees F. in Washington last Thursday, and this dog is not only sitting on concrete in the sun, it's wearing a cardboard garment. The photo caught my eye immediately because I also have a husky. On a day like last Thursday, she's allowed outside for no more than 30 minutes at a time, and even then she's in the shade on grass in a spot where she can dig in damp sand if she wants to. She usually wants to. Now I'm not claiming that this picture captures Kisa at the exact moment poor Left Wing Husky was baking on the sidewalk, but she certainly spent several hours in this spot on that day: 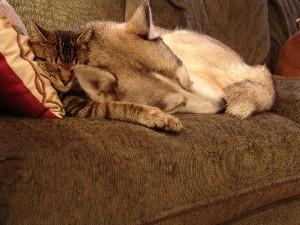 So there you have it. MoveOn.dogs are encouraged to perpetuate hysterical accusations with no basis in fact and are rewarded by being forced to broil in Husky Hell. Reformclub.blogspot.dogs are encouraged to live in tolerant peace with all their fellows and are rewarded with a spot on the couch in an air-conditioned living room, which is incidentally right next to the kitchen where even more almost-heavenly rewards are usually available.
Posted by Kathy Hutchins at 4:21 PM

Sigh. You'd think you had enough matters of actual substance to whine about.

"Holy crap, the left are dog-abusers!"

Have you never had a sense of humor, or did they lose it at the cleaners?

Look, I tried putting Kisa in the Wedding Crashers trailer, and it just didn't work out. When you're sitting around on Saturday afternoon with a spare dog jpg in your pictures folder, you do what you can.

And besides, they are dog-abusers. Not only do they use their helpless huskies as left-wing billboards, they got in a public health snit and banned dogs from outdoor restaurants in Alexandria. Nanny-state pinkos.

And if he tries to use that lame excuse that he does have a sense of humor, I'm just not funny, I'll start telling my viola-playing lawyer jokes.

I may not have a sense of humor, but I'm afraid that still doesn't make you funny either.

By the way, I do agree about keeping a furry dog out in the heat. My golden retriever sticks to similar rules as your Husky.

"I may not have a sense of humor, but I'm afraid that still doesn't make you funny either."

He's got you there, it just wasn't funny.