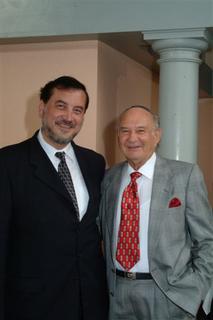 The gentleman on the right in this picture is one of those many quiet heroes who came storming out of the soul-crushing experience of the Holocaust to fashion impressive careers in the United States. I use the word "fashion" advisedly, because this is Stanley Glogover, my grandmother's (father's mother) cousin, who grew up as a wealthy kid in Makow, Poland. His family owned the department store. In the United States, he became the fastest graduate ever of the Fashion Institute in New York City, doing three years of work in one. He was such an amazing student that they asked him to stay on and teach for a few years.

But between his Makow years and his stellar rise in the fashion industry, he had a six-year hiatus, replete with ghettos, concentration camps, a German experiment that consisted of opening his skull without anesthesia, a long stint at Auschwitz and a few years in Displaced Persons camps in Italy. Someday I hope to write the full story of his experiences.

His fashion career has made him much beloved of women the world over. He is the inventor of the maternity bra and the nursing bra.

Now he enjoys his retirement here in South Florida, where that photo was snapped a week or so ago. The question that puzzles me is: who is that funny-looking fellow on his left?

Jay, what would he think of comparing Gitmo to the Nazis?

I would accept his opinion, whether I agreed with it or not. He has standing.

Oooops, forgot to mention---the fellow on the left is a very handsome man.

the fellow on the left is a very handsome man.

Indeed. It's a puzzle why he's nowhere to be seen on the Wedding Crashers trailer.

Well, that couldn't possibly be me. No one has ever accused me of being on the left.

His photo just became available. Otherwise he'd have been in!