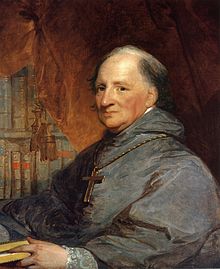 I've posted on this over at American Creation, but I thought I would share this post with the readers here at The New Reform Club now that we have just finished celebrating the Independence Day holiday.

The first Roman Catholic bishop in the United States, John Carroll, came from a prominent Maryland Catholic family. His brother Daniel Carroll signed both the Articles of Confederation and the United States Constitution. His cousin Charles Carroll was the only Catholic signer of the Declaration of Independence. John Carroll had a critical role in the early American Republic as well, although not in the political sphere.  John was a Catholic priest and eventually was ordained the first Catholic bishop for the young United States of America, and then later elevated to be the country's first archbishop. In 1791 he composed the following prayer to be said in all Catholic parishes throughout his diocese (which at the time consistent of the entire United States).  The prayer was a demonstration that the ancient Catholic faith was compatible and at home with the principles of the Republic:


We pray Thee O Almighty and Eternal God! Who through Jesus Christ hast revealed Thy glory to all nations, to preserve the works of Thy mercy, that Thy Church, being spread through the whole world, may continue with unchanging faith in the confession of Thy Name.

We pray Thee, who alone art good and holy, to endow with heavenly knowledge, sincere zeal, and sanctity of life, our chief bishop, Pope N., the Vicar of Our Lord Jesus Christ, in the government of his Church; our own bishop, N., all other bishops, prelates, and pastors of the Church; and especially those who are appointed to exercise amongst us the functions of the holy ministry, and conduct Thy people into the ways of salvation.

We pray Thee O God of might, wisdom, and justice! Through whom authority is rightly administered, laws are enacted, and judgment decreed, assist with Thy Holy Spirit of counsel and fortitude the President of these United States, that his administration may be conducted in righteousness, and be eminently useful to Thy people over whom he presides; by encouraging due respect for virtue and religion; by a faithful execution of the laws in justice and mercy; and by restraining vice and immorality. Let the light of Thy divine wisdom direct the deliberations of Congress, and shine forth in all the proceedings and laws framed for our rule and government, so that they may tend to the preservation of peace, the promotion of national happiness, the increase of industry, sobriety, and useful knowledge; and may perpetuate to us the blessing of equal liberty. We pray for his excellency, the governor of this state, for the members of the assembly, for all judges, magistrates, and other officers who are appointed to guard our political welfare, that they may be enabled, by Thy powerful protection, to discharge the duties of their respective stations with honesty and ability. We recommend likewise, to Thy unbounded mercy, all our brethren and fellow citizens throughout the United States, that they may be blessed in the knowledge and sanctified in the observance of Thy most holy law; that they may be preserved in union, and in that peace which the world cannot give; and after enjoying the blessings of this life, be admitted to those which are eternal. Finally, we pray to Thee, O Lord of mercy, to remember the souls of Thy servants departed who are gone before us with the sign of faith and repose in the sleep of peace; the souls of our parents, relatives, and friends; of those who, when living, were members of this congregation, and particularly of such as are lately deceased; of all benefactors who, by their donations or legacies to this Church, witnessed their zeal for the decency of divine worship and proved their claim to our grateful and charitable remembrance. To these, O Lord, and to all that rest in Christ, grant, we beseech Thee, a place of refreshment, light, and everlasting peace, through the same Jesus Christ, Our Lord and Savior. Amen.

This is just one example of the devotional piety of the tiny and somewhat beleaguered English Catholic population of post-Revolutionary War America.  Prior to the massive influx of Irish, German and then Italian & Eastern European immigrants starting in the 1840s, the Catholic faithful in the United States were relatively few in number and often a target for anti-Catholic demonstrations and propaganda.  Despite this, the Catholics in early America tended to be a patriotic bunch, embracing the new Republic's guarantees of religious liberty and freedom of conscience. This embrace extended beyond the reach of mere politics, and affected the liturgical piety of the Catholic Church in the young United States -- an interesting example of how religious institutions not only embraced the new American order after the Revolutionary War, but worked to strengthen and support it.
Posted by Mark D. at 3:21 PM